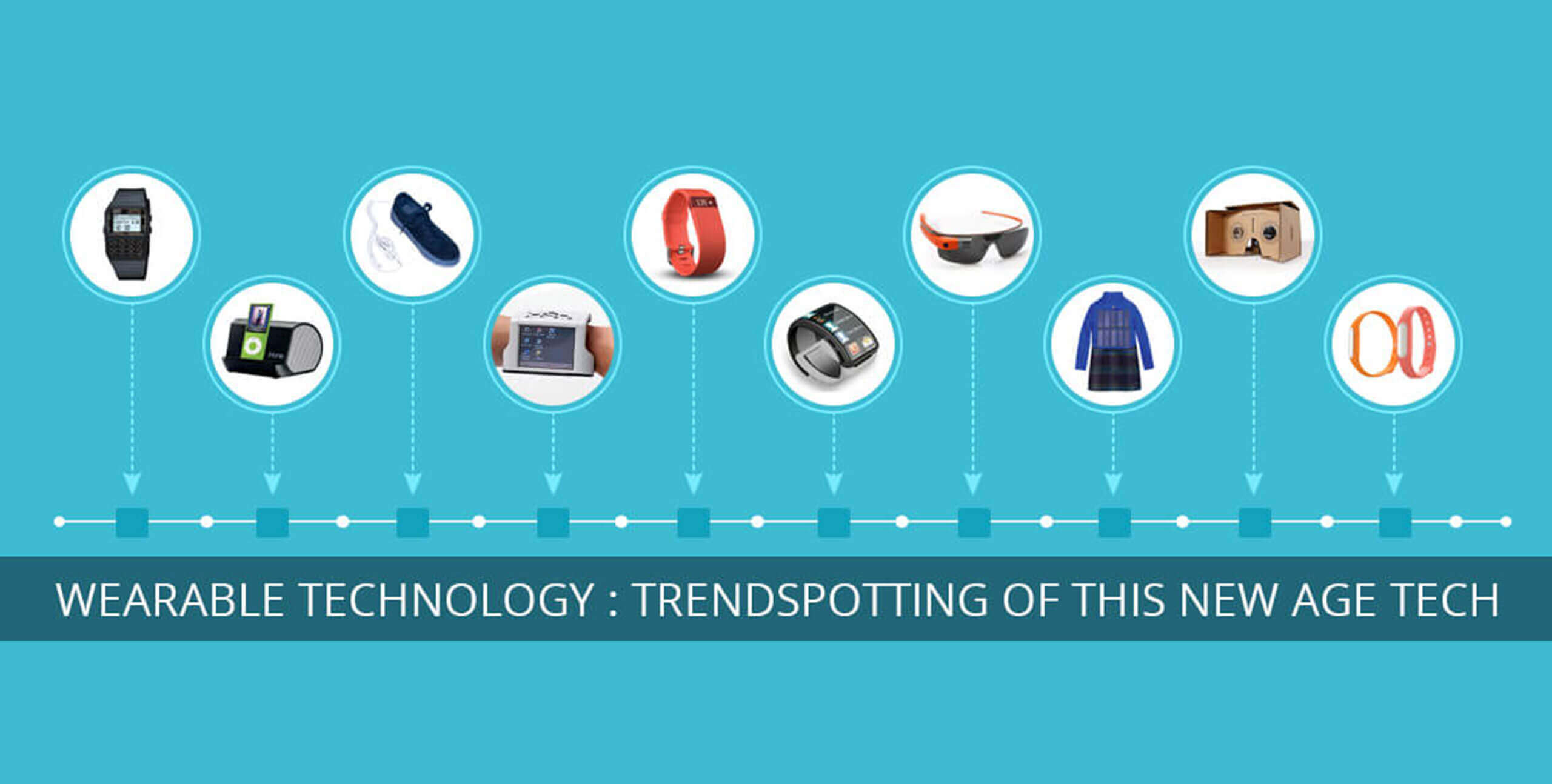 Technically, wearables date as far as 1970’s -1980’s when calculator watches were all rage. What stood as a symbol of geeks is now becoming mainstream with numerous wearables available for the masses on the market.

These include the very popular smartwatches, activity and fitness trackers, VR headgears and smartglasses etc. Often worn as accessories, these wearables include a number of advanced features and functionalities. Also, it is estimated that the global wearables market will reach a value of a value of 19 billion U.S. dollars in 2018.

The evolution of wearables has been steady, if not at a fast pace, as can be seen through the following timeline of all wearable trends till date.

1970’s – The Pulsar Calculator Watch was immensely popular wearable technology back in the 70’s and the craze for the gadget raged on to the 80’s. The models cost $ 300 to $3950 depending on the type of model bought.

1979 – Sony Walkman was the first ever low cost portable stereo and it revolutionized the way we listened to music.

1981 – SEIKO UC 2000 WRIST PC was perhaps wearable technology at its best back then. It allowed the users to tell time, do some basic calculations and had a keyboard that could be strapped to the arm. Unfortunately, there weren’t many takers for this wonder.

1984 – The Space Attacker Watch by Nelsonic made gaming portable. It had two neat buttons, which allowed the wearers to play a basic arcade game.

1989 – By the end of the 80’s, the Private Eye was invented. The device consisted of a head mounted screen, a hand held input, an 85 MB hard drive and a motorbike battery! Google Glass anyone?!

1990’s – If you are a 90’s kid, you will be able to relate to the funky Sneaker Phone, introduced by Sports Illustrated. The corded ‘shoe phone’ was offered by the company as a free promo in early 90’s for those who subscribed to the magazine.

2000 – Levi’s welcomed the millennium with their ICD + Anorak. It consisted of a conductible fabric harness, which allowed a mobile phone, an mp3 player and headphones that could be integrated within the jacket. It also had a built-in button, which could allow wearers to switch between these devices.

2002 – Up next on the list is the Bluetooth headset, which I am sure that many of you must have used ever since its launch in 2002. Nokia introduced this unique technology, which let users answer calls on the go.

2006 – Nike+ was a collaboration between Nike and Apple. The fitness tracking kit included a shoe embedded tracker. The users could use it to view the time, distance, pace and the calories covered when they went for a workout session on an iPod Nano screen. This maybe set the tone for the present day fitness and activity trackers!

2008 – Fitbit Classic is the trendsetter of the present day wearables. Introduced as a wristband, it allowed the wearers to track their steps taken due the entire course of a day, the distance traveled, the calories burned, the intensity of activities carried out and sleep.
2009 – Tech-giant Samsung launched S9110 Watch Phone, which set the tone for smartwatches to arrive in the near future. Featuring a 1.76-inch (45 mm) color LCD display, the watch was 11.98 millimeters (0.472 in).

2010 – The era of smartwatches continued with the launch of  Sony Ericsson LiveView. It consisted of a wearable watch that became an external Bluetooth display for Android smartphones.

2013 –
Google Glass – Google made headlines yet again with its Google Glass (now called Project Aura), which was the first smart glass of its kind. Developed by Google, manufactured by Foxconn and unique in every aspect, the glasses were discontinued after a couple of years. The main reasons included – privacy concerns, headaches after prolonged use and addiction to the device! Google maintained in 2015 that although it would stop producing the prototype of the Glass, it would still be committed to the development of the product. True to its word, the company filed a new application for a new version of the Google Glass.

Tech-biggies join the smartwatch brigade –  The year saw many companies engaged in the development of smartwatches, which included but were not limited to – Apple, BlackBerry, Foxconn, Google, LG, Qualcomm, Sony, Samsung, Acer and Toshiba.

The same year saw the launch of – Samsung Galaxy Gear, Sony SmartWatch 2,[32] and the Qualcomm Toq.

Even startup Pebble sold 190,000 units of its smartwatches the same year while Startup Omate came up with TrueSmart. However, it made public debut the next year.

The Google I/O in June saw the introduction of the Android Wear platform along with the release of LG G Watch and Samsung Gear Live.

Motorola too entered the scene with its Moto 360.

But the biggest news of the year in terms of wearable technology had to be that of Apple’s announcement of its first ever smartwatch, called the Apple Watch. Slated to release early in 2015, everyone was hooked on to the bit of news from the Cupertino-based tech-giant.

2014  –
Solar Powered Jackets –  By the end of 2014, Tommy Hilfiger launched a jacket on the market, which consisted of embedded solar panels. The solar panel jackets let users charge their mobile phones while on the go.

Activity Trackers – 2014 also saw a rise in the number of fitness and activity trackers, which included a number of advanced features and functionalities. Fitbit, Jawbone, Basis, Garmin, Withings, Nike, LG and Samsung were the key players in this regards.

2015 –  2015 was dotted with the introduction and announcements of a large number of wearables.

Starting with the much-hyped Apple Watch, there were other devices ranging from useful to bizarre.

For instance, Ringly and bPay are some of the prominent products, which made their debut this year with a number of companies wanting to hop on to the wearable bandwagon.

2015-2016 – At present, VR headsets such as Google Cardboard and Oculus Rift are taking the world by storm. These allow users to get an enhanced feel when it comes to gaming and other virtual experiences than ever.

Looking at the trends, it is clear that the most successful wearables are the ones worn around the wrist. This means that smartwatches and activity trackers are both going to co-exist, at least in the near future.

Although Fitbit is the key player when it comes to fitness trackers, the competition is likely going to get heated up with players like Xiaomi (Mi Band at $15 costs lesser than the least expensive Fitbit) joining the race.

As for smartwatches, they are definitely going to get ‘smarter’ with time and there are chances that they will become standalone devices and not just an extension of smartphones/tablets.

What wearable technology do you want to place your bet on?

*We will send the checklist to your inbox and keep you updated with the latest trends and insights on app development to keep you on top of your game.
by Hiral Atha - Mar 5, 2016 Read the Post