Pros and Cons of Flutter – The Complete Review Updated For 2021 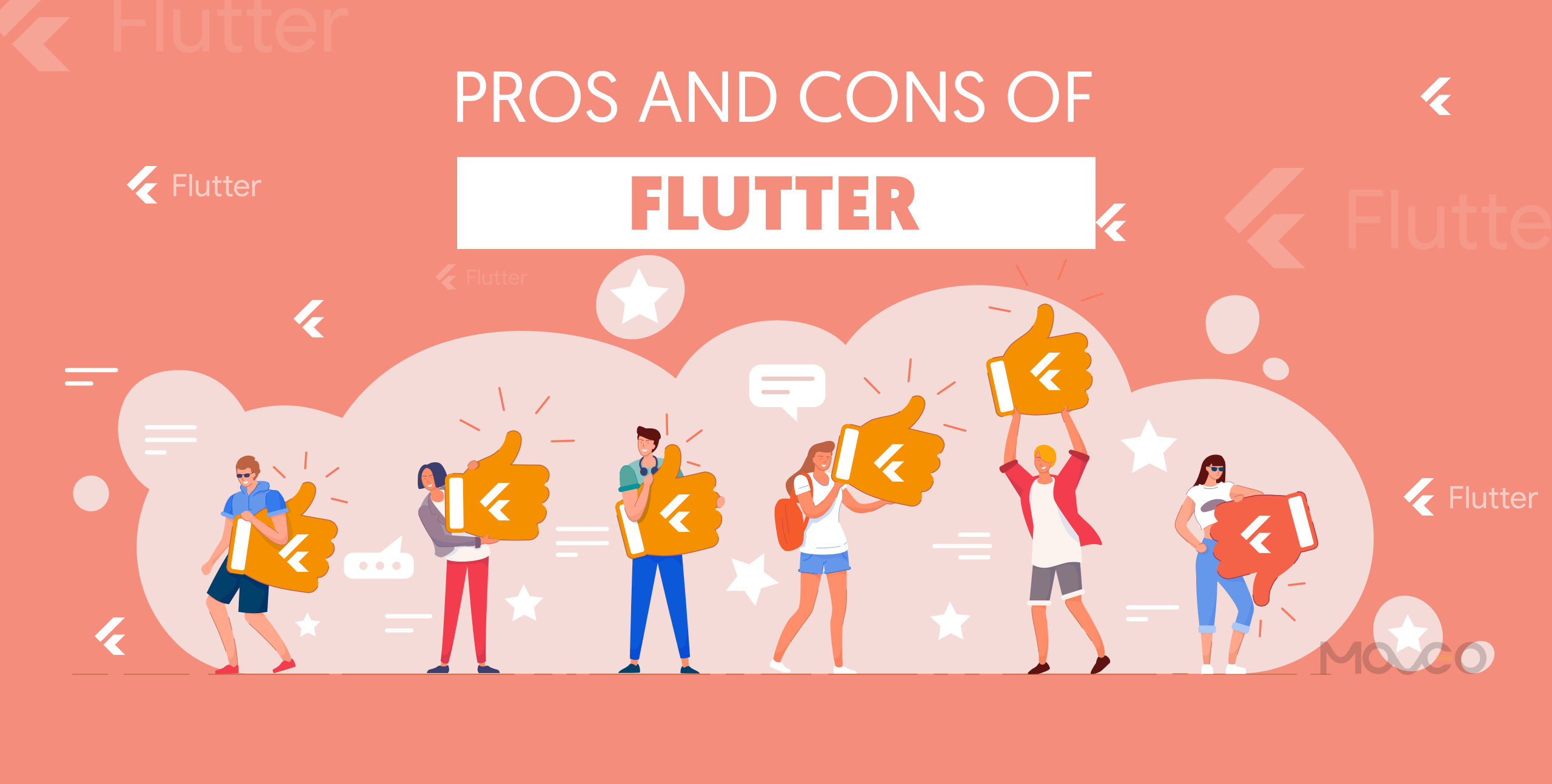 There are as of mid-2020, over 50,000 Flutter apps on Google Playstore. Over half a million developers use Flutter every month and how much they love it is evident in forums of GitHub and StackOverflow. Clearly, Flutter is emerging a winner in the cross-platform app development space and proving a worthy competitor to React Native.

In fact, the popularity of flutter has soared significantly despite its being such a young framework. Here’s a look at how the number of questions about Flutter on StackOverflow has increased as compared to competitors.

On our blog, we have discussed in detail the reasons that make Flutter a highly reliable cross platform app development framework. We’ve spoken about the myriad of big brands that have entrusted Flutter with their apps.

Today, we’re going to take an objective look at the pros and cons of Flutter as an app development framework.

Whether you need an android, iOS, or web app, Flutter gets the job done with just one codebase. Of course, that is what all cross-platform frameworks are supposed to do, but Flutter makes the process extremely easy and the results extremely beautiful.

With Flutter’s custom Widgets, creating prototypes is easier than ever. Flutter helps Google create what it calls Ambient Computing – the idea that apps built with Flutter are available absolutely anywhere you need them to be, completely free of device limitations.

Of course we’re going to talk about this. Flutter’s hot reload is undoubtedly a great development tool, shaving hours’ worth of time and doing wonders for developers’ sanity.

In a highly competitive environment of the current digital landscape, getting to the market faster could be the one thing that sets you above the competition.

When you choose Flutter, you get to develop your application faster than the standard native application. Not only do you save time because you’re writing just one codebase to run on all platforms, various other features in Flutter aid in saving time across the development cycle.

Hot reload makes development several weeks faster as you spend less time performing reviews and changes. Since you have just one codebase to test, testing and debugging takes lesser time.

Moreover, Dart – the app programming language used by Flutter – is a pleasure to work with. It is simple, concise and simply faster to code with. No classes in other classes, easy access controls, simple numeric enums, async/await keywords and efficient code formatting, all go on to make app development with Flutter faster, cleaner and concise.

Checkout this post on freecodecamp.com to check out how fast Flutter really is. In an experiment by @Biz84.

4. App Maintenance Is Easy Thanks To Simultaneous Android and iOS Updates

Since your Flutter app uses the same codebase across platforms, rolling out updates is another feature that becomes infinitely more seamless and simple. You can release updates for both your iOS and Android apps simultaneously, significantly reducing the changes in backend infrastructure as well as implementation and synchronization problems that frequently arise when different sets of developers work on different platforms.

So once you have published your app, you can now invest all your energy in growing your user base and improving your core offering. App maintenance tasks like bug fixing can be handled easily with Flutter app development.

As a result of this, startups can even save money by parting ways with the development team and choosing to handle app maintenance in-house. Even if that means hiring in-house developers, with Flutter you’d need only one developer and not two different ones for iOS and Android separately.

There are speculations that Google is working on a new operating system called Fuchsia which ‘could’ eventually replace android. While not much is known in detail about this as of yet, you can rest assured in the knowledge that Flutter is Fuchsia ready and you will be able to release your app of Fuchsia that day it is launched.

This will prove to be a major leg up when the change happens and other apps are transitioning.

If devices weren’t already extremely diverse in their sizes and aspect ratios, you now have a resurgence of flip phones and foldable phones taking the markets by a storm. Making apps work smoothly on screens that range from long, narrow rectangles to almost square shaped interfaces is not as easy as good developers make it look.

Flutter helps this cause thanks to its layout system and declarative nature. Writing apps so they fit different layouts is markedly easier in Flutter than in iOS or even Android.

The biggest feature that separates apps from web pages is their ability to use device features for a more immersive experience. Native apps can use device capabilities like camera, GPS, haptic feedback and motion sensors to deliver rich experience. Cross-platform apps have been getting better at this, albeit with some want.

Flutter lets you use all these device features to their full capability without any lag.

Sure it takes a bit of effort on the developer’s part to prepare code in Swift or Kotlin and then send data to Dart using a special mechanism called platform channels. However, the Flutter community has already prepared channels for the majority of native functionalities of a standard smartphone, so you don’t have to do it from scratch. All of these channels are available to the entire developer community.

There aren’t as many cons as there are limitations which the Flutter community is working on relentlessly. Most of the cons we listed in our Flutter reports of last year have already been resolved and no longer belong in the list. To me, that is a mark of reassurance that Flutter is continually evolving for the better.

However, the purpose of this article is to enunciate the pros and cons of Flutter so here are the current limitations you could face during Flutter app development.

1. Getting the Platform Specific Look and Feel

While Flutter will perfectly enable you to run a high performance app on both iOS and android with just one codebase, getting the perfect platform specific look and feel could be a little bit lacking for the taste of purists.

If you need your app to strictly conform to Material Design principles on Android devices and Apple Design System on iOS, you may want to prepare two separate applications.

2. Flutter Is a Young Technology

While that’s mostly a good thing, as young gives you a modern edge, there’s always the possibility that this young framework may go on to evolve in a way that doesn’t always agree with us. Although given the strong backing it has from Google, Flutter is likely to be used in their new OS and hence will continue to remain current and relevant.

3. New iOS and Android Features May Be Introduced Later

Updated rolled out by Android and iOS will be introduced in their native SDKs first and on Flutter a wisp later. This may be categorised as a con. However, in order to maintain system compatibility it is usually seen that developers cannot add new system features on day one even in native apps. So that one seems to balance out rather smoothly.

While there are few but legitimate cons of Flutter app development, and the pros do outweigh the cons, knowing about them nevertheless is a good thing. If you are staunchly particular about the look and feel of your app and think that you may end up coding multiple features in native languages and integrate them into Dart, you may want to consider adhering to native development.

However, Flutter gives you undeniable advantages like faster development and cost savings. These advantages can be a game changer when it comes to using your funding cautiously and getting your product to market faster. Faster development lets you validate your MVP idea quicker, begin user testing early on and save money.

If those sound like a good thing to your business, Flutter app development might be the perfect solution for you.

*We will send the checklist to your inbox and keep you updated with the latest trends and insights on app development to keep you on top of your game.
by Hiral Atha - Jan 25, 2021 Read the Post