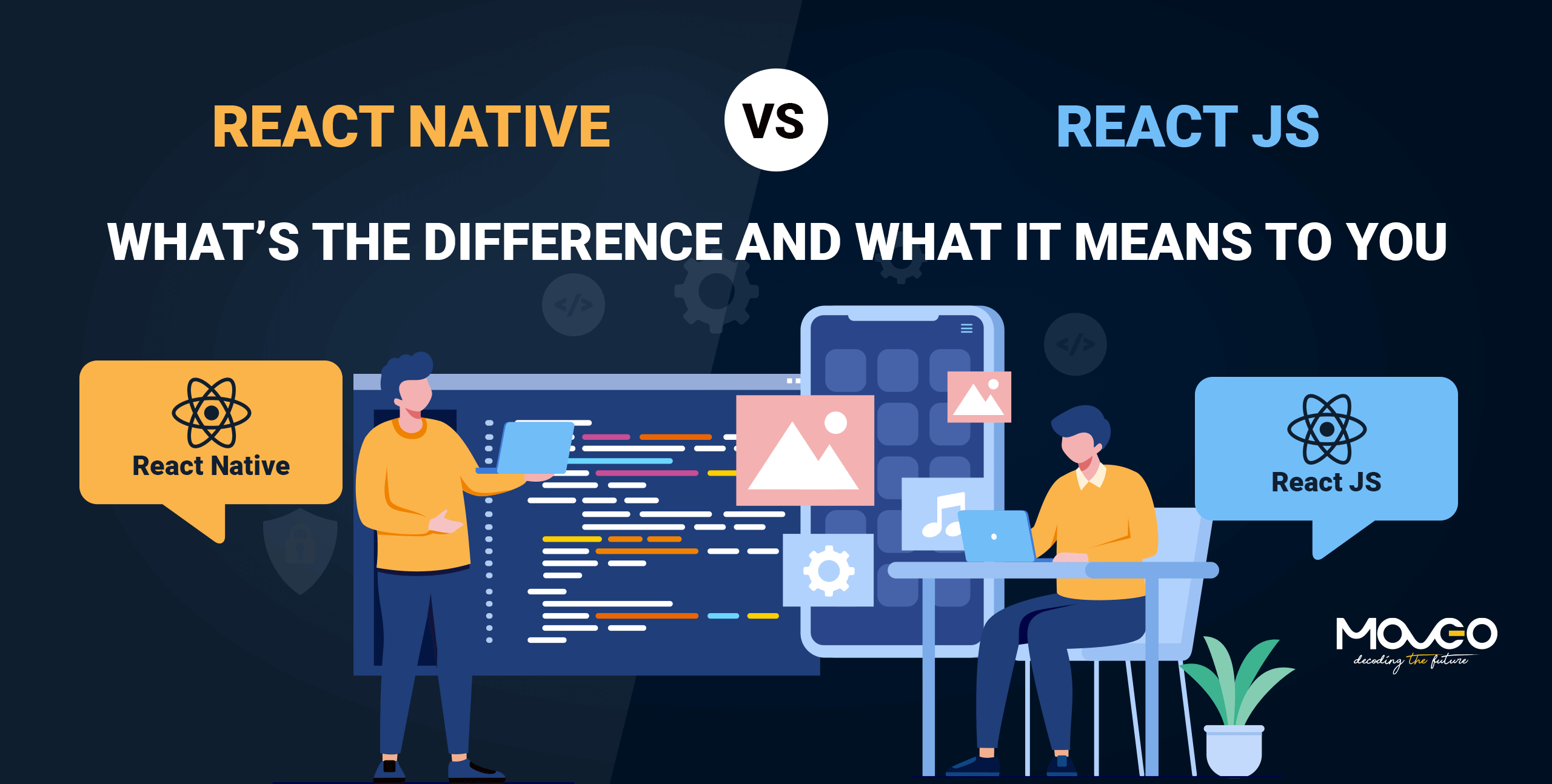 Serendipity happens. Engineers at Facebook were just trying to build a dynamic and high performance UI to optimize their internal development needs, and React.js was born. At the time, it was a JavaScript library that united the speed advantage of JavaScript and a whole new way of rendering pages that led to a responsive and dynamic user input. When the project began to grow and produce impressive results, React.js was made open source and became highly popular among developers. At this point, something new called React Native was released. For a rookie, the two sound like versions of the same thing. Are they though? What are the differences between React.js and React Native? What they mean to your business and which one should you choose? Today’s post will answer all your questions regarding the difference between react>js and React Native.

Also denoted as ReactJS or simply React, React.js is a declarative, flexible and efficient JavaScript library specifically responsible for building a hierarchy of UI components for web applications. It uses reusable components to render views, allowing developers to reduce build time for their web apps. It helps manipulate the website DOM faster using the virtual DOM model. Essentially, it is the V part of MVC architecture – helping you develop the View layer of web applications. It helps build web applications faster with rich UI and reusable components.

React.js provides support for both frontend and server-side. It is used by all kinds of businesses – small to large – to build single-page applications and mobile apps. Some of the biggest examples of companies using React.js are Facebook and Instagram.

React Native is much like a consequence or advancement of React.js. While React.js is a JavaScript library that builds UI for web applications, React Native is a platform for building native apps using only JavaScript, on platforms like iOS, Android or Windows.

Using the same base as react, you can build rich, high performance native UI for Android or iOS apps without necessarily having to learn Java, Objective-C, Swift, or other native languages. That’s what makes React Native such a darling of the developer community right now.

React Native development makes it possible to mimic the behaviour of a native app in JavaScript and in the end gives you platform specific code as the output. Up to 85% of React Native code is reusable, allowing you to use native code to further customize your application.

So essentially, you are using React.js components in the React Native frameworks to develop actual, completely native iOS and Android apps.

React.js vs React Native – what it means to your business

The real question is what it all means to your business? Should you use React.js or React Native for your next project? Here’s the answer to that – and a real answer, not roundabout responses from the dictionary.

So that’s your primary differentiator. If you need a web app that can carry out complex functionalities and is accessible through a web browser, you can use React.js.

If you need a native app that works on iOS or Android, or Windows, but needs to be coded just once, and not individually for each platform, you need React Native.

Now, let’s elaborate on the pros and cons of React.js and React Native from a business perspective to help you decide which one you need for your next project.

This one’s a fun backstory. Facebook was only looking for a way to reduce the Facebook application build time, or re-build time to be specific. They weren’t exactly going after partial refresh of the virtual-DOM. Yet they discovered that a partial refresh was making the application much faster than the conventional full refresh.

The React virtual DOM model refreshes only parts of the page, making is significantly faster than the DOM full refresh. React knows just when to re-render a part of the application by observing data changes to the state.

The result is incredible speed in your web applications built with react.

React uses JSX which makes it very easy to read the code of each component as well as easily observe the layout. You can see how components interact with each other, ow they are plugged/combined with each other. Every change or update is easy to track. It also allows React to send you error messages and warnings. All of this makes React a helpful visual experience while coding. JSX also keeps the code simple and concise, especially handy when writing large pieces of code.

React introduced the idea of component based architecture and reusable components. This allows React.js developers to take individual pieces of UI elements that work like Lego blocks that can be combined to form a complete, independent, sustainable micro-system.

These components can be mixed and matched to form different applications or parts there-of. So every time you develop an application, the components save you the trouble of writing extensive boilerplate code. Just grab the components you need and build a UI you want in very little time.

Since React.js renders on the server-side, it gives your applications or webpages an edge with search engine optimization, bringing in ample organic traffic. With server-side rendering, the Google bots visiting the server see the indexed and cached content. Also as the page load time decreases, that’s an extra boost to the SEO. Overall, your webpages come into higher visibility and scale the rankings with minimal effort.

React.js can run a little high on the overhead costs. Sometimes, the need arises to download additional react libraries which can cost time and money.

React.js tends to have a steeper learning curve than React Native. New developers may need to spend some time learning React.js before they can proceed to development.

Pros and cons of React Native

With React Native tools, you can build a native app that works on both iOS and Android, or any other platform, by using just the React Native framework. The result is not a hybrid or web app, it is in fact an authentic native app. That is one of the biggest advantages of using React Native.

As mentioned above, React Native provides up to 85% code reusability which means you can use components to build 85% of the application and use it on either platform.

The remaining 15% code is platform-specific which can be customized to give your apps the authentic native experience.

The smallest change you make to you code is reflected right there when using React Native. You don’t need to reload the entire code to watch the changes update. This is called the hot reload and is one of the prized features of React Native that gives you faster development and error-free code.

React Native too, like React.js, relies on external third party react native libraries that can be complex and tedious. Sometimes, they may even require testing to avoid bugs. The lack of native libraries in React Native is one limitation developers constantly deal with.

React Native’s JavaScript thread takes a long time to initialize meaning that runtime for gadgets can get longer.

Facebook controls React Native and hence, the license and patenting issues are here to stay. The fear looms that developers could possibly be stopped from using the framework at any time, though that doesn’t seem to deter the half a million monthly developers using React Native right now.

So which is better – React.js or React Native

As we mentioned earlier, React.js is the best choice for web apps and complex web pages while React Native is a great choice for native app development that deploys on all platforms with just one codebase. Now that you know all pros and cons of React.js and React Native, as well as the real difference between React Native and react.js, you can easily decide what you wish to use on your next project.

Still wondering which one you should pick. Schedule a free consultation today and let our engineers help you understand the best way forward for your app idea.

*We will send the checklist to your inbox and keep you updated with the latest trends and insights on app development to keep you on top of your game.
by Hiral Atha - Mar 15, 2022 Read the Post