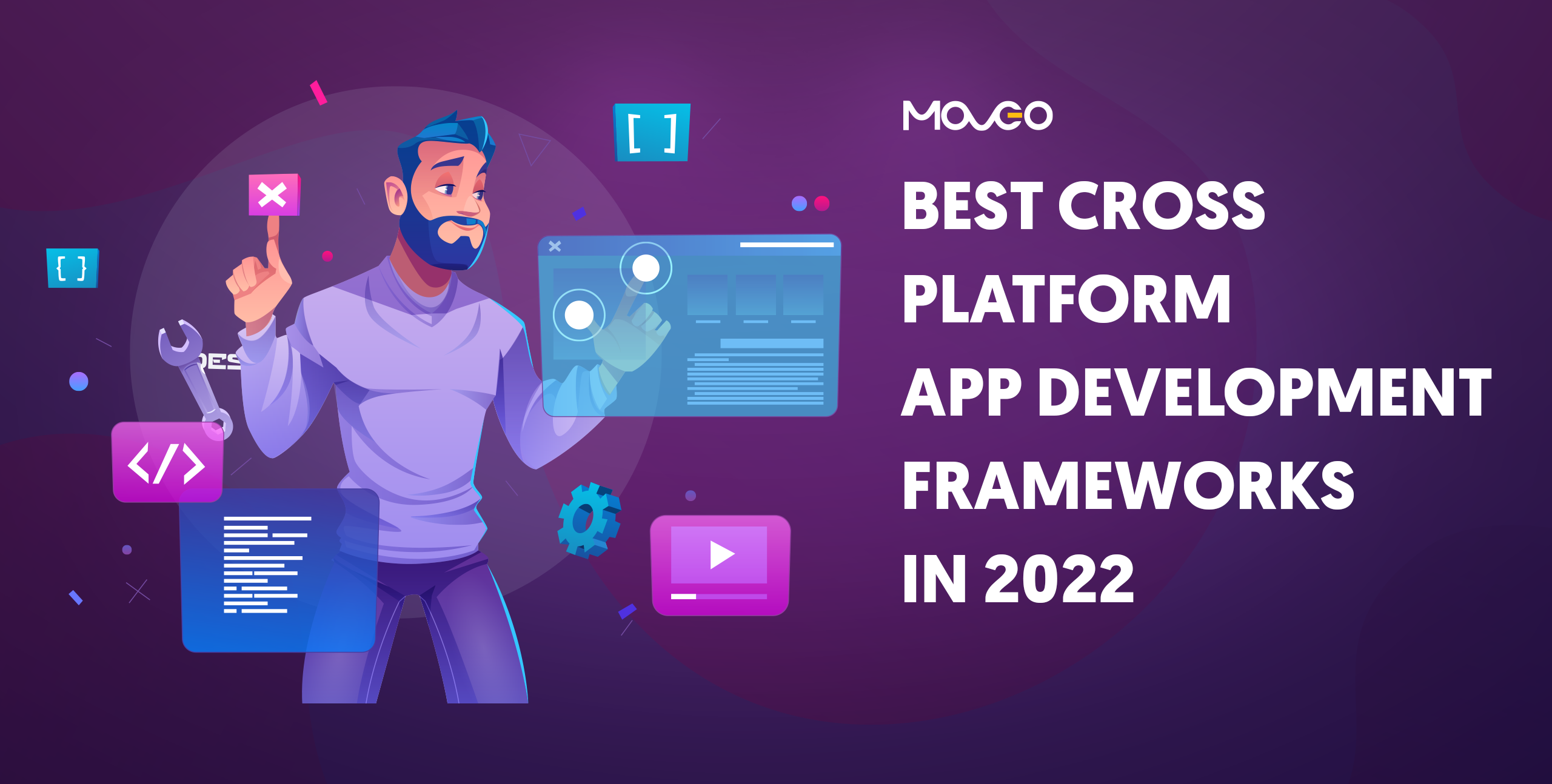 Cross platform app development is the future of digital business. Inarguably in a post-Covid world, every business needs an app. And unless you have a ton of money at your disposal, you need an app development solution that delivers quality on a tight budget. Well say hello to cross platform apps – nifty little apps that can run on Android, iOS, even Windows and other platforms – and you only have to write the code once.

Cross platform apps pack a powerful punch. For business owners, cost savings and time to market are the direct advantages of cross platform apps. But the good news hardly stops there. Cross platform apps have much deeper market penetration as they can be easily downloaded and used by people anywhere using any kind of smartphone.

By building for a specific platform, you’d be restricted to a certain number of users (either iOS or Android) and that’s a bad bargain. There are about 2.5 billion Android users in the world as of January 2022, and over 1 billion iOS users. Your business would not want to lose out on either of those chunks.

Cross platform app development allows you to build apps that are ready for all major platforms, giving you a market reach of all the 6.64 billion smartphone users around the world. Sweet, isn’t it?

It is for all these reasons that cross platform app development has become the most preferred choice of entrepreneurs, startups, small to medium enterprises, and anybody who is looking for high quality apps at competitive prices.

Now that you know you wish to take your business ahead with cross platform app development, it’s time to get cracking on the right technology. One of the first selections you need to make is the right app development framework.

An application framework is a software framework used by developers for building mobile applications. It is a library containing all the necessary tools required to develop an app. 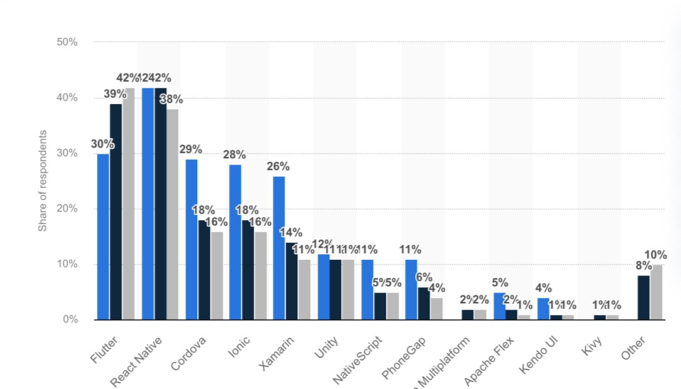 As a direct competition to Facebook’s React Native, Flutter started off as an open source mobile UI framework that helps developers build cross platform apps with just one codebase, creating native UI for each platform. This way, the app looks and feels exactly like a native app giving users a high performance app at half the cost of an actual native app.

Flutter encourages developers to start building their app with the thought ‘what I want to build for the user’ instead of bothering with ‘what platform should I build for’. Google calls this Ambient Computing, enabling developers to build apps for smartphones, desktops, smart watches, tablets, smart tvs, and much more.

Google even broke down the distribution of developers using Flutter, showing that it is a popular framework for everyone from startups and enterprises to freelancers and self employed developers. According to Google, of the half a million developers using Flutter every month, 35% work for a start up, 26% belong to small and medium enterprises, 19% or self-employed, and as many as 7% work for various different design agencies. Clearly, Flutter is growing increasingly in popularity among developers from various verticals.

Some of the best features that make Flutter perfect for cross platform app development are:

Flutter uses dart which is a strongly typed programming language and object oriented in nature. With its declarative and reactive typing style, Flutter does not require a Javascript Bridge thus helping developers write code in relatively lesser time. Flutter offers as much as 80% code reuseability making it perfect for deploying apps on various different platforms with just one code.

Flutter appsprovide users high-quality performance at par with native apps. Since the user interface is designed specific to the platform, Flutter apps look and feel just like a native app giving users the immersive experience they were looking for.

One of the most enticing features of Flutter is hot reload.Any changes made to the code can be seen in real-time by the developers thanks to the hot reload. So if you’re making the icon one size larger or want to colour the button one shade lighter, you don’t have to reload the entire app to see the changes reflected. With hot reload, you can see every single change you make take shape right in front of your eyes in real time.

With high code reusability, Flutter enables developers to deploy their apps on multiple platforms in record time helping business owners get to market faster and save as much as 50% of the cost.

The next most popular cross-platform app development framework is Facebook’s react native. Developed by Facebook, React Native started off as an internal hackathon project to be used to develop Facebook products. When engineers at Facebook saw what an interesting framework they had created, they decided to open source it. Today, React Native is Used by 38% of developers worldwide. Some of the biggest businesses including Facebook, Microsoft, and Uber have used React Native in their development projects.

React Native is a JavaScript based mobile app framework that allows building natively rendered cross platform mobile aid that can be deployed to iOS, Android, or other platforms with writing code just once.

Since React Native is built on React, which is essentially a JavaScript library, it has a modest learning curve and is easy for anyone with JavaScript background to easily learn and work with React Native.

React Native app development, being a cross platform app development framework, allows for code reuse. While a larger chunk of the code is common, React Native lets developers write some parts of the code specific to the platform thus allowing them to customise the app to a given platform. This means that aid built with React Native look Native and provide high performance at par with apps built specifically for iOS or android.

Developers from startups to larger enterprises along use Ionic to build cross platform mobile aid for business. As much as 10% off all apps on the Apple App Store and 16% apps on the Google play store use ionic. Launched in 2011, ionic remains popular despite the advent of newer frameworks like Flutter and React Native.

Ionic is an open source UI toolkit that enables developers to build hybrid apps that feel very close to native apps in aesthetic and performance. It is based on Angular JS and uses prominent web technologies like HTML, CSS, and JavaScript to build a variety of mobile apps including enterprise apps, Progressive Web apps, mobile and desktop apps and much more.

Some of Ionic’s best features include many ready to use components. The ability to use hundreds of APIs, various plugins to support native features, ability to customise code for different platforms, and a very loyal community.

Launched in 2011, Xamarin is a streamlined, independent, open source cross platform framework that can build applications for Android, iOS, Windows and more platforms. Developers can reuse up to 90% of code with Xamarin, cutting development cost and time to market remarkably giving your business a massive time advantage.

Xamarin is relatively easy to learn and use as anyone with the knowledge of .net and C# can easily get on board with it. It’s easy linking with native libraries enables developers to perform smooth App customisation and impart native functionality to the app.

One of the earliest players in cross platform space, PhoneGap was developed in 2005 and acquired by Adobe in 2011. It is duly notable that Adobe has discontinued support for PhoneGap Build as of 1 October 2020 therefore, while a number is loyal followers still use it for cross platform app development, you will not receive any further updates in PhoneGap.

For cross platform app development in 2022, it is hence advisable to choose one of the above four frameworks for any new App development projects your plan to kick off in 2022.

The framework you choose for cross platform app development plays a great role in determining what your final app looks like and how your customers interact with it. So if you need help deciding which is the right framework for your, or you know what you want and just need to hire the best cross platform app development team for your business, contact Moveoapps today for a free consultation. We will help you chart the best way forward and build an all that perfectly works with your business goals.

*We will send the checklist to your inbox and keep you updated with the latest trends and insights on app development to keep you on top of your game.
by Hiral Atha - Feb 28, 2022 Read the Post