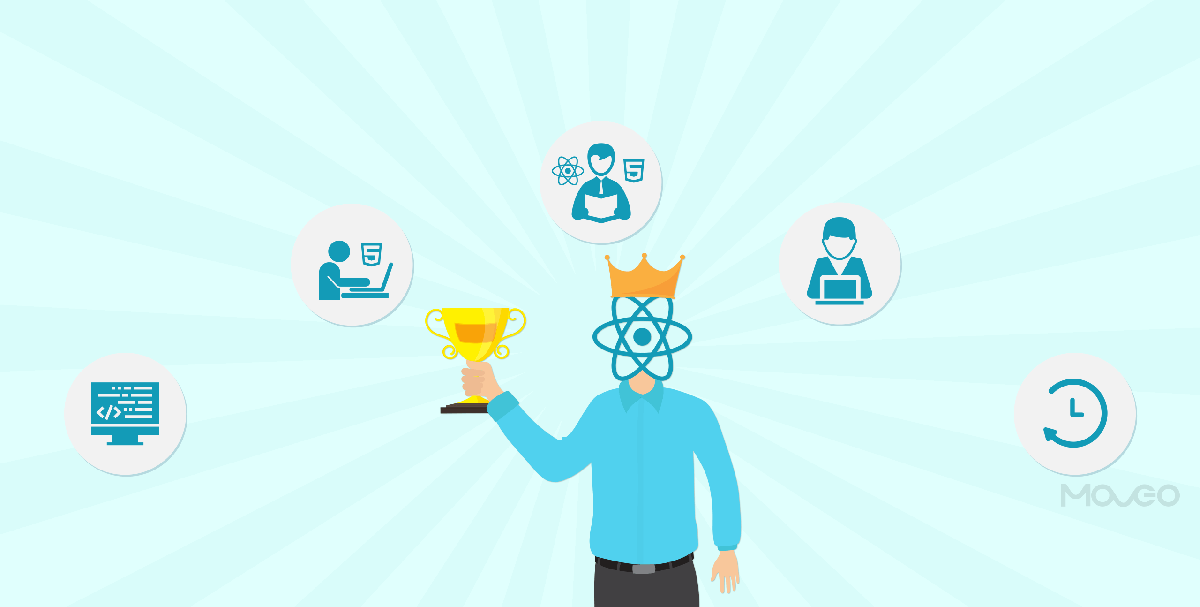 As the world of mobile apps expands beyond comprehension, demand for faster and better apps shoots up. On one hand, we all want apps that perform flawlessly and are sleek and gorgeous to look at. On the other hand, we need apps that are faster to deploy and take less time in developing. These two requirements are often at loggerheads with each other because high performance comes with native apps that take the time to develop, and faster deployment comes with cross-platform apps that compromise (at least a little) on performance.

There is a dire need for a solution in-between the two extremes and hybrid apps offer just that. That is why the quest for better languages, frameworks, and tools that help in the development of high-quality hybrid apps keeps programmers on their toes. One such solution that is rapidly transforming the world of mobile apps is Facebook and Instagram’s React Native.

React Native is a JavaScript library for building UI (user interfaces), that allows you to design mobile apps that work as flawlessly as native apps, but still, lets you reuse code across mobile platforms and the web. So you no longer need to develop for iOS and Android separately, as just one developer can write code for both the platforms, saving time and money, rolling out the app much faster without any compromise on the performance. Here are a few reasons why React Native is the future of mobile apps –

React Native redefines the concept of cross-platform development and code-reuse. It lets you develop a common, reusable code for both iOS and Android, and easily embed native code wherever necessary to give the app more platform specific authenticity. This way, it saves you plenty of time by not having to write two sets of code and yet, it doesn’t make the app sluggish in specific operations where native code is required. Native performance and faster release cycles – that’s what React Native gives you.

Most cross-platform apps that are built with JavaScript allow you to make calls to native API’s, but primarily use HTML and JavaScript inside a web view. While this allows some semblance of a native UI, the performance is far from satisfactory.

With React Native, on the other hand, the JavaScript components are rendered as native platform widgets. This makes your app feel and work just like a true native app without the need of a web view. So if you want to add Google Maps functionality to your app, you can use the native module as a plugin, providing a much smoother experience.

Read also:Native, Cross Platform or Hybrid – Which is the Best App Development Technology?

Because React Native strongly relies on language fundamentals and is thus highly readable, it is extremely easy to learn and follow, even for new developers. For those who are new to JavaScript, React Native is the perfect place to start as it serves as a great teaching tool for learning a range of components such as maps and filters.

As for experienced developers who are already well versed in standard language features, React Native doesn’t try to reinvent the wheel and introduce entirely new concepts. It, therefore, takes much less time to learn and in turn saves time and money on development.

‘Write once, run everywhere’ is a famous phrase in the cross-platform app development world. However, it has more negative than positive connotations as it is associated with sub par performance across both platforms. With React Native, on the other hand, Facebook clearly acknowledges the differences between the two platforms, and aims to do things differently and more efficiently, and calls the process ‘learn once, write everywhere’.

React Native works by embedding JavaScript files in the app and running them locally. Since it uses the vast and already popular library of React, which has seen great success on the web, there is a flourishing ecosystem of components available to developers who can integrate any new feature as a simple plugin, without having to manipulate the entire code.

Coding is no easy job and anything that makes developer’s lives easier is an outright winner. React Native has a great development environment and leads to a positive developer experience. What can we say, happy developers, are far more productive and React Native helps keep developers happy. React Native can make and implement changes in the app while it’s running, eliminating the need to restart. Here’s an excellent demo of that you can enjoy.

React Native uses flexbox for creating app layouts, allowing you to use the same layout for iOS, Android, and the web, eliminating the need to learn platform specific layouts. Also, you can leverage the Chrome developer tools to attach your React Native to your desktop chrome browser and gain easy access to its debugger and profiling tools.

The Apple app store is infamous for its review process and approval times. Having gone through it once to get your app launched, developers have a low threshold of patience to do it all over again every time they wish to update the app. React Native has a solution for that too. Because it primarily uses JavaScript, React Native allows you to release updates directly, without having to go through the app store. While we did discuss a number of handy tools that let you launch instant updates in our earlier post, with React Native, the process is simpler and more streamlined since the app is already built on the same framework.

*We will send the checklist to your inbox and keep you updated with the latest trends and insights on app development to keep you on top of your game.
by Hiral Atha - Aug 10, 2017 Read the Post