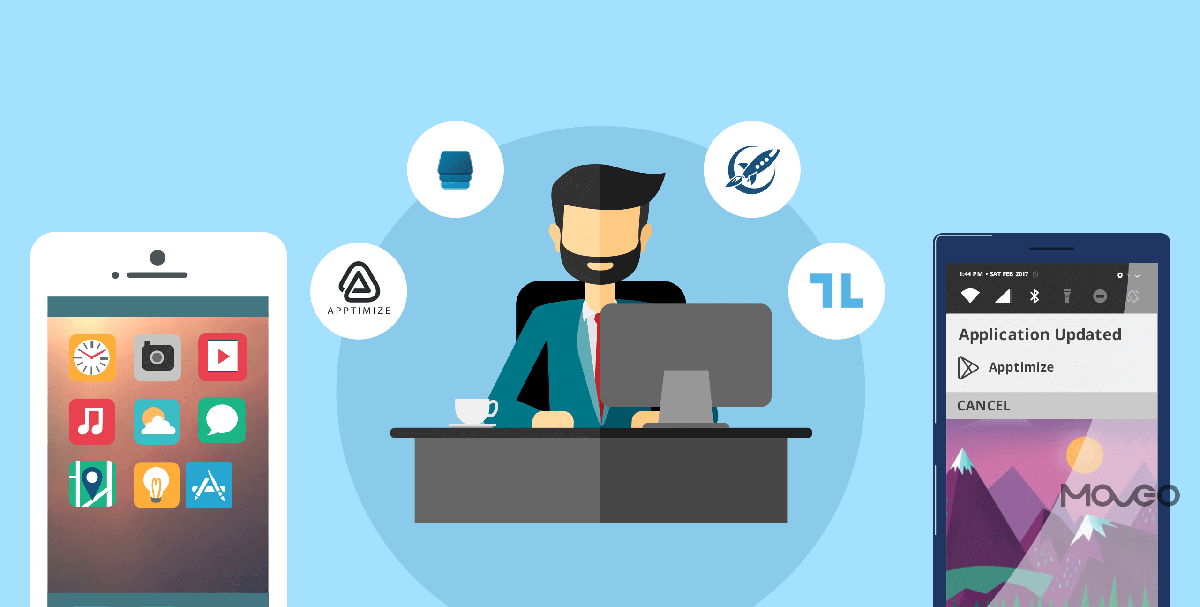 After working hard for months developing an app, holding your breath through the review and preparing for the perfect launch, you can’t wait to watch positive reviews stream in. Instead, you see users complaining about bugs or requesting a slight tweak in a feature and you want to fix the issue immediately before more users encounter the bug. What you need right now is an instant update that you can roll out quickly without having to go through the app store update process.

Of course, you can simply go through the standard app update release process but developers have their reasons to evade that when possible. In the case of iOS apps, the review process of an updated version is just as rigorous as the app review and can take days. Developers often want to fix bugs and release updates faster than that and hence, need tools that can roll out updates faster.

In the case of Android apps, the review process is fairly quick but the fragmentation of Android devices is an issue. Open Signal’s Android Fragmentation Report shows 24,093 distinct Android devices seen in 2015. No matter how much testing and beta testing is performed, screening for that many devices is easier said than done and some issues or bugs are likely to slip in. With the right tools, it is possible to fix only the affected devices instead of making a universal update.

–Update Configuration Data– Sometimes, you may wish to make changes in some variables in your app, such as update the difficulty level in a game, without having to wait for an app store review and approval.

–Request or force app updates– Users who don’t update the app need to be nudged from time to time. You may send out a message requesting them to update or force them to update by telling them that the app won’t be supported otherwise.

–Modify Analytics– if you wish to start tracking a new variable you weren’t tracking earlier or change where you send the analytics data, you can use specific tools.

–Feature flagging– You may wish to activate premium features on selected devices only, make a certain variable available to VIP users or randomly select one percent devices to run a particularly special feature.

If you wish to skip the app store review and get all these tasks taken care of instantly, there are tools or SDK’s for all of them. Here’s a list of all the tools that help app developers and marketers launch instant updates on their apps.

Rollout is a tool that allows you to override any existing code in your app to modify or update any feature in real-time. It lets you inject JavaScript code into your native app (also known as a patch), thus overriding the native Swift or Objective-C code. Once done, it can freely interact with your existing app code and make required updates. Rollout can run specific patches on specific versions of an app, which is a rare feature. It is perfect for fixing bugs or simple feature flagging. It can in fact also be used for A/B testing.

If you wish to make any changes in an app’s UI, Apptimize is a very helpful tool. What started as an A/B testing tool for mobiles later morphed into an ‘Instant update’ functionality which enables a new version of the app on all devices. While not suitable for any logic changes, it has a great efficacy with UI updates.  A new update also supports feature flagging, though it requires that you modify your app code before submitting to the app store.

Optimizely started out as a split testing tool for the web with their mobile support coming out much later. You can use Optimizely for instant updates such as feature flagging, or code blocks. Optimizely also allows you to define live variables that can be updated from the Optimizely interface. That is why Optimizely calls itself ‘A Complete solution for app experiments without the developer headaches’.

According to the official website, “Taplytics is a fully integrated mobile A/B testing, push notifications, and analytics platform providing the tools you need to optimize your mobile app”.

‘Taplytics variables’ are dynamic variables that allow you to change any of your app content or functionality dynamically from their website. It can help you make real time changes to images, copy, color or the look of the entire page. You can even optimize your push messages, create A/B tests and use data intuitively to create a strategy for the future.

Swrve supports in-app campaigns, A/B testing, analytics and optimization of push notifications. It even allows marketers to test updated features on a selected set of users before enabling it on all devices.

LaunchKit’s Cloud Config lets you alter settings and features in your app making quick and instant updates easy to carry out, thanks to its cloud capabilities. By just adding a Config variable and linking it to your app, the app will receive new data automatically, without having to modify your native code.

Having been named Gartner’s Cool Vendor, Launch Darkly helps manage feature flags with audit logging, flag statuses and custom roles. It can be used in multiple dev environments at enterprise scale. It helps release updates to selected groups allowing you to control risk to customer impact.

Marketers who want an effective tag management tool need look no further. Google Tag Manager (GTM) allows you to add and update tags for site analytics, conversion tracking and remarketing. It supports all Google as well as third-party tags.

If you are looking for an analytics management tool for better and more efficient tracking, mParticle is the solution. It helps you collect data from apps, the web, and even third-party tools and connects the data to all your marketing and analytics systems.

App marketers have a tough job trying to keep their apps consistent in engaging users and bring in revenue. When app store review and approval takes far longer than a marketer can wait, instant app updates need a quick solution. With the aforementioned tools at your disposal, you never have to worry about delays in app updates anymore. Have you tried any of these? Do you recommend any others? Do share your experiences with us in the comments section.

*We will send the checklist to your inbox and keep you updated with the latest trends and insights on app development to keep you on top of your game.
by Hiral Atha - Aug 2, 2017 Read the Post