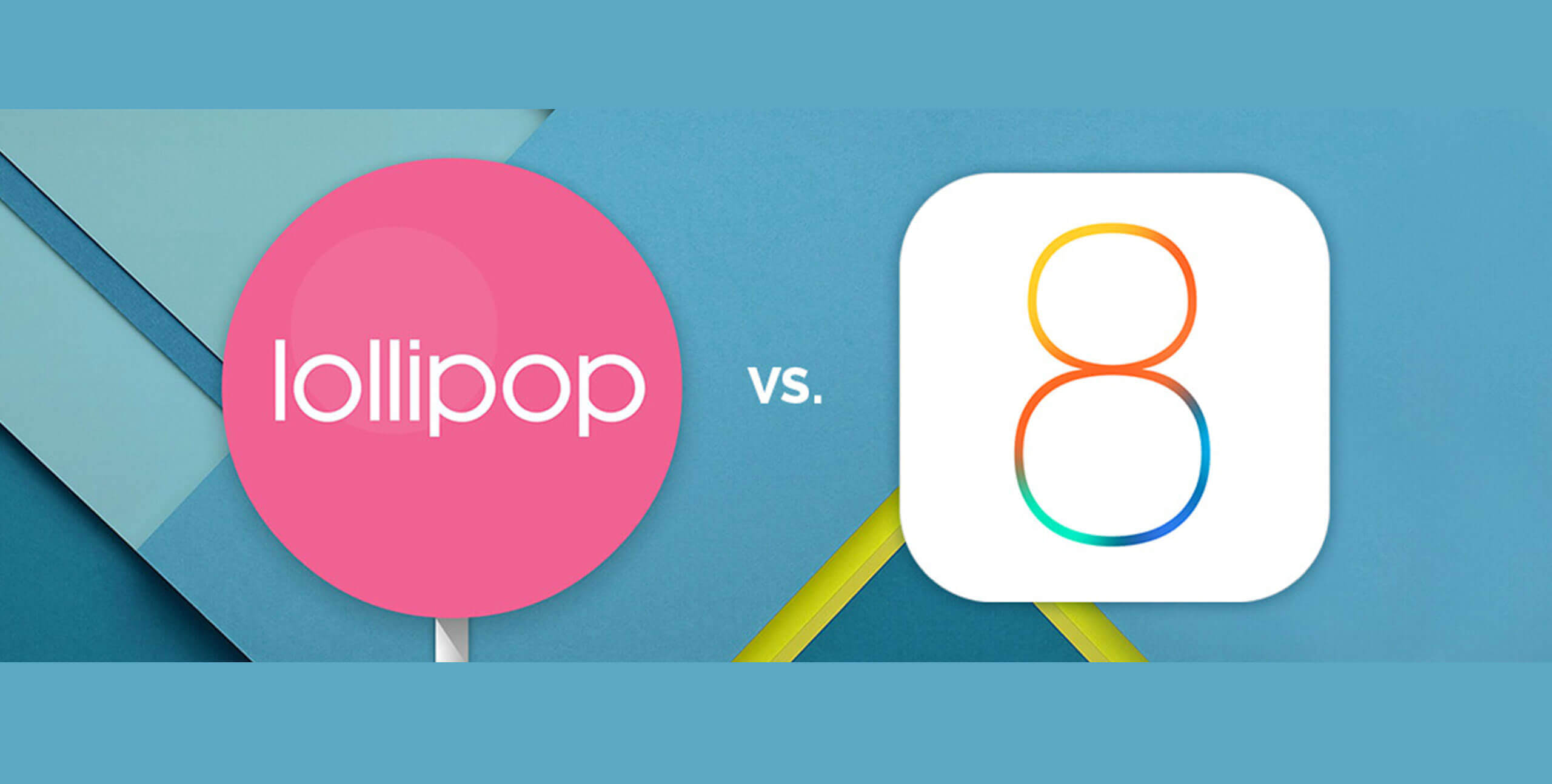 iOS and Android – the arch-rivals lock horns yet again with the release of their updates iOS 8 and Android Lollipop or Android L.

The Android L is arguably the most stable version of Android OS till date and iOS 8 is said to be the biggest iOS release ever.

Also, both mobile operating systems have a number of features and functionalities, which will surely take app development on these platforms to a whole new level.

Let us go through a detailed analysis of some features of iOS 8 and Android L to see where both stand in relation to each other.

Significant Changes in Look and Feel

iOS 8 and Android Lollipop – both subscribe to design minimalism.

iOS 8: Apple introduced flat design in iOS 7 and did away with skeuomorphism. iOS 8 has retained flat design and this is evident from its interface and icons. It allows beautiful typography and simpler layouts, which augments clarity on the screen space and makes room for more content.

Android L: Android introduced a new design concept – Material Design, which is inspired by Paper and Ink. The brainchild of Matias Duarte, vice president of design, it offers new gestures, beautiful typography, different layouts, animations, realistic lighting and vivid colors. The design was formulated to bring more simplicity and clarity to the Android OS and offer an aesthetic UI that instantly appeals to users.

Both iOS 8 and Android Lollipop have altered notifications in their updates.

iOS 8: iOS 8 offers interactive notifications. Use them to answer an important text message, accept Calendar invitations, interact with online friends on Facebook, mark or snooze reminders and even answer mails without going back and forth on an app that you are using currently. The only drawback is you can’t swipe to dismiss the notifications and use it only to open the relevant app.

Android L: Android L allows you to access notifications on devices with a locked screen; users don’t need to unlock it every single time a notification pops up. The notifications are now ordered as per their priority and you can swipe them to dismiss or double tap to use a particular app. This makes it easy to know which notifications need to be dismissed at a glance and saves your time.

Android L and iOS 8 bring some interesting twists to multitasking.


iOS 8: iOS offers a simple multitasking interface in comparison to Android L. But it makes up with an interesting change. Press the Home button twice and you reach an interface with your most recent contacts lined up on the screen. Swipe right and you will get your favorite contacts. This means the people you often talk to, are easily reachable in quick taps. Use this functionality to make a call, text or access the FaceTime feature without leaving the app you are using at present.

Android L: When it comes to multitasking, it is interesting to note that all apps running on Android L are displayed in the form of cards in a carousel layout; to move between the apps, slide up and down and swipe left or right to close each app individually. Some apps will also have multiple cards on the carousel so that you can jump to a particular section of an app rather than reopening or closing the entire app for a specific use. Think of a browser with multiple tabs. With this feature, you can close the tabs you no longer need or skip directly to a tab.

iOS 8: iOS 8 takes security to the next level. Use the Touch ID fingerprint sensor to unlock your device or as a replacement for Apple ID. Want someone else to access your device? iOS 8 allows you to save up to five fingerprints and name them. Also, you can now use this security feature to access third-party apps such as those related to financial transactions. You can do this by setting up Touch ID and selecting from the options on screen. You can set the ‘Require Passcode Delay’ to ‘Immediately’ so that no one can access the data in your device, even for a second.

Android L: Even Android has upped its ante in the security department by giving users a Facial Recognition feature to unlock their device and pair up with Android Wear for better impact. Additionally, it lets you create multiple user accounts on your device so that family members or friends may log in and use your device without any access to your private data.

The security feature offered by Android doesn’t end here. With the Smart Lock feature, you get access to a secure lock screen set, which allows you to lock and unlock it depending on your proximity to the device. This is known as ‘On-body detection’ and is the latest update to Lollipop.

Android L offers a universal switch to save battery, while iOS 8 lets users keep check on apps that drain out battery.

iOS 8: Although there are no instant settings that allow you to save battery on iOS 8 devices, you can always change settings manually, which includes – background refresh, closing apps that consume battery, turning off auto-refresh etc. However, there is a new Battery Usage panel in Settings, where you can see a list of apps that drain out all the battery. It allows you to keep a track on apps that are consuming more battery power, over a period of time. This way, you will know which app you need to close or stop using, if needed.

Android L: Android L has an edge over iOS 8 when it comes to battery life. It has a battery saving feature that goes by the name of ‘Project Volta’ (read more about Project Volta here), which adds up to 90 minutes extra life to your device. There is a single, universal switch that lets you turn on/off the battery saving and you are good to go even with low-battery levels.

‘Hey Siri’ in iOS 8 may have an advantage over ‘Ok Google ’by being better at recognizing words and phrases, but when it comes to voice based search, Google wins hands down.

iOS 8: Siri – Apple’s voice-assistant feature has been around for quite some time now. Things are all set to get better with ‘Hey, Siri’, which has added to its capabilities. For example, you can use your voice to activate Siri even when the device is on a standby mode or asleep and access it remotely, for e.g. when you are driving a car. At present, you need to have your device plugged in or in a battery case to use this feature.

Android L: Google’s voice search with – ‘Ok Google’ feature in Android L is undoubtedly much faster and more informative although Siri is better when it comes to recognizing words and phrases. The voice based search works seamlessly and you can access it even from the Lock screen. Also, unlike ‘Hey Siri’, you need not plug your device to a power source to make use of this feature.

Continuity – Seamless Use of Technology

iOS 8 wins with its ‘Continuity’ functionality, which allows users to do much more as opposed to Android L.

iOS 8: iOS 8 also boasts of its brand new ‘Continuity’ functionality. It allows ‘hands-off’ calls, checking and replying messages and emails on different devices, viewing important notifications and much more to its users so that they can easily pick up from where they left off. This means you can seamlessly work on your iPad, iPhone and even Mac without any hiccups along the way! With Apple Watch added to its ecosystem, this functionality holds special prominence and gives iOS 8 full points.

Android L: Android L has no major change in terms of continuity, except the fact that you can view notifications from your Android smartphone on your Chromebook. But, you can’t reply to messages or calls, if you want to. At present, you have to make do with the AirDroid app.

With a bevy of new and not-so-new features, both iOS 8 and Android 5.0 Lollipop are neck and neck. There is no clear winner here except the end-users who are going to get the best of technology on their chosen platforms.

*We will send the checklist to your inbox and keep you updated with the latest trends and insights on app development to keep you on top of your game.
by Hiral Atha - Apr 27, 2015 Read the Post