What Makes Flutter The Best Mobile App Development Framework For Startups In 2021? 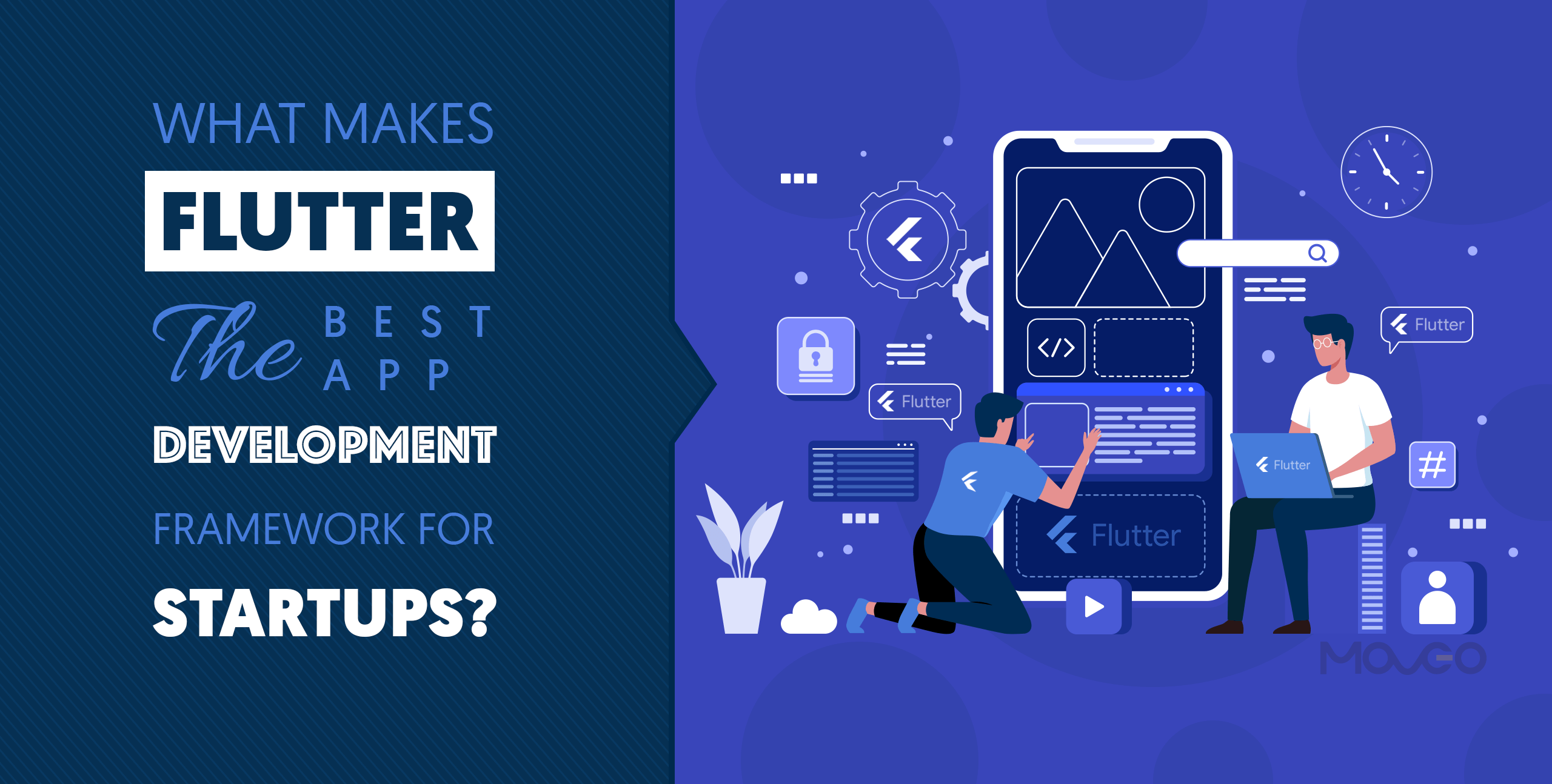 If you read our blog post on the defining mobile app trends for 2021, we established that large enterprises will make a strong move towards native app development while startups and SMEs will embrace cross platform app development.

This is primarily because native development is the gold standard and that’s what large enterprises are going for, owing to the larger impetus on online business in the new normal. However, it is still too expensive an undertaking for startups with more limited cash flow.

Startups need mobile apps, period. While we’ve been saying that for years now, this year, no one need say it. Social distancing, persistent fear of Covid and discovery of new strains, all mean that consumers in all industries are still far from casually walking up to stores.

So startups need an app development solution that is quick, cost-efficient and high performance, just like them.

To that end, today we’re going to discuss a framework that has quickly become the most sought after name in cross platform app development.

Flutter is a framework for building natively-compiled apps across mobile, web and desktop from a single codebase. It uses the programming language Dart and incorporates Material Design and Cupertino widgets to create spectacular apps that not only look and feel native but can also imitate the platform itself to behave naturally on any platform, even though you’re using the same codebase.
Contained within that definition is an overview of all the reasons why Flutter is the perfect mobile app development solution for startups in 2021. Let’s take an elaborate look at each of these below.

Apps Built With Flutter Are Faster

We cannot stress this enough – apps that load slow are uninstalled fast. Users are simply too spoilt for choice when it comes to apps and have no reason to waste a second waiting for an app to load.

When you build an app with Flutter, you leverage the Skia Graphics Library which is a remarkably fast and mature graphics library with strong backend. Delivering up to 60-frames per second (in fact, they’re shooting for 120 fps), it gives you a super smooth UI that loads up quickly in the shakiest of connection speeds.

Flutter uses the same UI and business logic on all platforms. This makes flutter apps perform more consistently across platforms.

You might argue that all cross platforms do the same thing, i.e. share codebase between platforms. However, Flutter is the only framework that allows sharing of the UI code and the UI itself. Most other cross platform frameworks rely on platform specific components for rendering which ends up requiring a property mapping layer and widget data synchronization. You then need to synchronize each animation into a widget call for each platform. It can get quite complicated if you’re short on time and breath.

Flutter on the other hand doesn’t need any platform specific UI components to render its UI. All you need is a canvas and you can forget about any worries of UI consistency across platforms.

This sounds like a given, because that’s what cross platform app development aims to accomplish – build apps that can be deployed on all platforms, this saving development time.

However, Flutter takes an edge above its competitors. It can reuse up to 80% of the code, reducing man hours by as much as two times compared to a similar app built in Swift or Java.

Flutter’s use of Declarative APIs too adds to significantly improving performance and increasing development speed. Visual adjustments and UI renditions are easier and faster, not to mention more convenient for your developers. 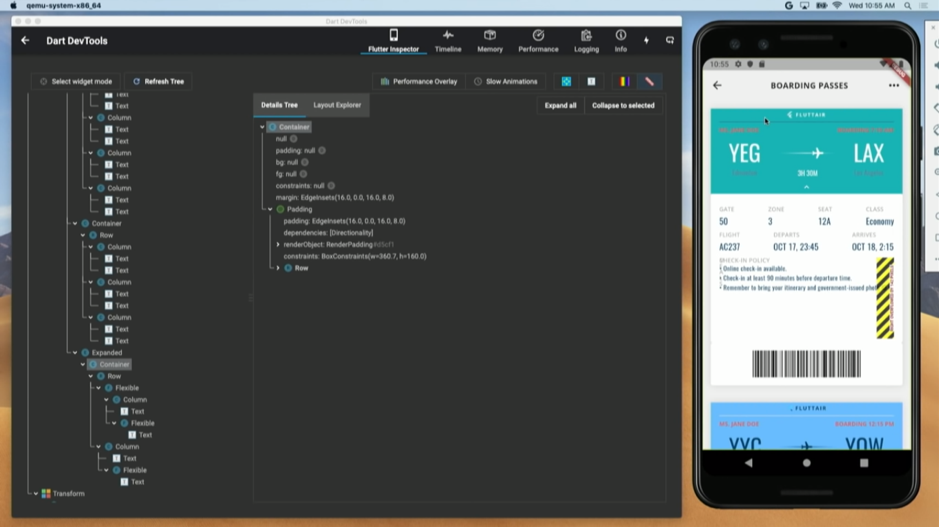 The most prized feature of Flutter is undoubtedly Hot Reload. Eliminating almost all friction in the process of designer-developer collaboration and making reviews infinitely simple, hot reload is single handedly responsible for shaving hours off the development process.

In older app development frameworks, every time you needed to make a change to the code, you would have to reload the entire application to see the change in action.

With Flutter’s Hot reload, you can see the changes you make to the code show up on the screen in real time without even losing its current state. This helps developers achieve the perfect UI by tweaking the code as many times as required until everyone is happy.

Like we mentioned at the start, native apps are notoriously expensive to build. The general impression that cheaper, faster alternatives compromise on performance quality is turned on its head by Flutter.

With over half a million developers using Flutter every month, and a 10% month on month growth, Flutter is clearly winning because of its great performance.

Since Flutter builds applications directly on the machine code instead of relying on any intermediate code interpretations, it eliminates any bugs and provides flawless performance across platforms.

Most experts assert that flutter apps are indistinguishable from native apps in terms of performance and UI.

Coming to the part that startups and business owners like best, Flutter app development produces spectacular results in prices much lower than other options.

Since Flutter reuses 80% of the codebase, your developers have to spend much less time writing boilerplate code. Moreover, since Dart is statically typed and much less verbose, writing code is easier and faster. All of these combine to altogether bring down your Flutter app development cost.

Because Flutter is so popular right now, the developer community is ever growing and finding talented Flutter developers is easier and more rewarding an investment.

Flutter apps can be deployed on any platform, iOS, Android or Windows. They can be used on smartphones, tablets, laptops and smart TVs alike. Having taken away all kinds of market limitations, flutter apps allow you to market your apps to a large audience worldwide.

This is a particularly useful feature for startups in 2021 as business is now global and being able to deploy your app on a variety of devices opens up the world to you.

Startups in 2021 need mobile apps that are capable of delivering high quality performance on a wide variety of devices, without costing them their entire first round of funding.

Flutter is just that solution. Obviously developers from all industries are actively leaning towards Flutter and it makes perfect business sense to choose this framework for your app development project. Customization potential in Flutter is tremendous and the performance is at par with the best native apps out there. That is the obvious reasons why the likes of Alibaba, Hamilton Music and Reflectly chose Flutter for their mobile app development. If you too are in a fix about what to choose that would deliver high quality without breaking the bank, do check out Flutter and you would not be disappointed.

*We will send the checklist to your inbox and keep you updated with the latest trends and insights on app development to keep you on top of your game.
by Hiral Atha - Jan 18, 2021 Read the Post