The Ultimate List of App Stores 2021 – Find your Niche Users 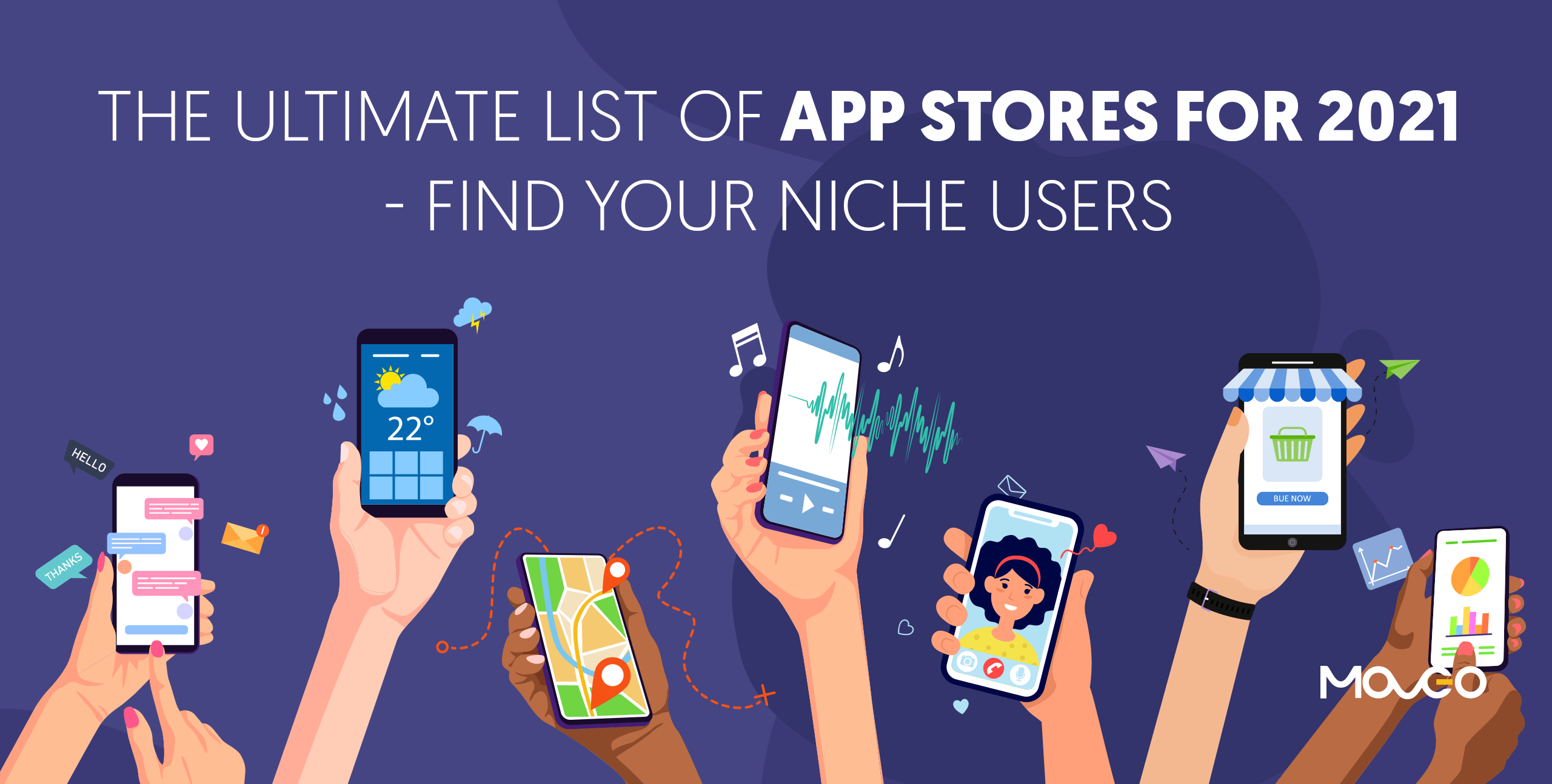 Why do you even need any other app stores when you’ve got Android Playstore and Apple App Store? Oh well, there are plenty of reasons:

Those pointers should give you a fair idea of why it makes sense including a number of other app stores in your app marketing strategy. Mobile apps have completely replaced a number of things from our lives. When was the last time you even thought about an actual notepad, calendar, clock, calculator, or even a wristwatch for that matter? Why would you when there’s an app for that.

However, with mobile apps becoming big business – an industry worth $150 billion to be precise – the competition too is fierce. For all the reasons mentioned above, and for the simple reason that you want to monetize on every app store there is, we’ve put together a list of all the app stores that you can sell your app on.

You don’t need to market your app on all of these app stores. Aside from the primary platforms including Playstore, App store, and Windows app store, you can choose a few more app stores that look appealing for your app and target audience. For instance, there are some app stores that are more populated by gaming enthusiasts and entertainment apps and others that are focused on business and utility apps. A good look at our ultimate list of app stores for your app will help you put your mouth where the money is and spend your app marketing budget in the right places.

Okay, you don’t need us to tell you about this one. But there’s a hierarchy here guys, and we cannot talk about wildcats without mentioning the tiger. So Google Playstore – the official Android app store – is home to over 3.5 million apps right now. With Android being the preferred operating

system on 72.2% of all smartphones in the world, the appeal is massive and getting your app on this one is pretty much the first thing to do once your app is ready.

We cannot talk about wildcats without honouring the lion either, right? Hence, the Apple App Store. Ruling nearly 30% of all smartphones in the world, iOS is undoubtedly a formidable operating system and its official App Store is home to 2.2 million apps, with a high percentage of paying apps.

Founded in 2008, SlideMe is an alternative app store that serves as a marketplace allowing
developers to distribute their new apps to people who don’t have a device with Google Playstore preloaded. In fact, when it comes to global reach for android apps, SlideMe ranks just second to Google Playstore!

Devices that don’t come preloaded with Google Playstore often come with SlideMe as a result of the company’s ‘on-device’ strategy that partners with device vendors, and provides access to a curated list of Android applications to these users. It carefully distributes apps to niche markets based on their geographical location and device configuration so that users feel warmer about the app from the get go, and developers get a shot at markets otherwise inaccessible to them.

1Mobile is an app store that features carefully curated collections of apps organized to give users a great experience. Android is the major target for 1Mobile though the website does feature apps from different formats. Users can find their favorite apps on here with the vibrant display of apps on 1Mobile including lists like ‘Games of the week’ and ‘Editor’s choice’. Featuring on these lists significantly helps developers garner precious downloads.
1Mobile follows a standard registration and app review process. Once approved, an app goes live in 2 days, following the standard 70/30 revenue model. With this, the company hopes to ensure quality apps for its users and is hence quickly becoming a leading alternative app store. it currently features 800,000 apps and counting. It supports interface in 13 languages giving your app a global reach.

CodeNgo is a bulk Android app submission wherein you can distribute your app to over 30 different app stores by filling in one form, not only on Android but all other operating systems including Amazon, Samsung, Opera and more. CodeNgo also offers a rich list of Top Chinese app stores where android apps can be distributed to one of the fastest growing app markets in the world that is Google Playstore sparse.

AppBrain is a browser based app store that helps developers distribute, promote and monetize their apps. Launched by former Google employees Mathijs Vogelzang and Uwe Maurer, AppBrain has millions of users who flock to download best apps for Android created especially for Android users as well as downloading apps when they don’t have Google Playstore. In addition to publishing and distributing apps, AppBrain also offers a bevy of developer services such as analytics, and promotion.

Aptoide is an alternative app store for android apps that allows users to download best apps for Android that are often not available on Google Playstore in their country or only offer a paid version. It offers developers comparatively easy entry in terms of the review and approval process, giving them a break while they wait for Playstore to pass through.

Even the same users often use multiple devices with multiple platforms today. Developers want to be able to distribute their app on all possible platforms not limited to Android and iOS. Amazon, Windows, Opera and a number of other operating systems have sizeable userbases that actively seek new apps and contribute to net revenues of the developers.

With Amazon being the biggest online marketplace for everything under the sun, they couldn’t stay far from the lucrative app economy too. Amazon Appstore is one of the top alternatives to Google Play that offers cross-platform services. Available on all Amazon devices such as Kindle Fire and Fire Stick, Amazon Appstore offers Android apps on these devices. With a bit of work, it can even install Apple App Store on Amazon devices. This opens up a wide market to app developers as Amazon devices have seen huge market proliferation in recent years.

With over 2 billion apps downloaded and counting, GetJar hits an impressive 3 million downloads every day. It supports all major platforms including Android, iOS, Windows and more. There is no upfront cost to register and developers can target any platform of their choice.

Launched in 2011, Opera Mobile Store offers mobile apps to users across all major platforms such as iOS, Android, Windows, Java and more. It curates lists of featured apps facilitating easier discovery and abundant downloads. Apps are divided into categories such as Business and Finance, Communication, Multimedia and more. Developers can publish apps to multiple formats once they’ve registered with a developer account. Opera’s massive reach to as many as 230 countries opens up a world of users to app developers.

The allure of Appolicious lies in leveraging the massive fanbase of Yahoo! users who once dominated the internet landscape. Appolicious provides some of the best iOS apps as well as owns the androidapps.com directory to distribute Android apps too.

By their own claim, Appszoom has over 3 million unique monthly visits, making it fertile ground for app distribution. It tests its apps comprehensively to give its users the safest experience.

Appland is an app store as well as an app-store manager. It allows developers to create their own and upload apps for free.

If you’re into flash powered games, this is your niche app store to target.

The perfect meeting point for gamers and game developers, Itch.io is a great place for indie
developers looking for a niche app store where they can let their most creative gaming apps shine.

In addition to the cross-platform app stores above, Apple really only supports a few other app stores. Some of the options include Tutu App, Tweak Box, and Panda Helper, that oftentimes allow users to download beta/test releases and third party apps which are not available on the official App Store.

China has emerged as one of the largest market for apps in the recent years and has over 92.1% smartphone penetration rate. Smartphone shipments in china reached 325 million units in 2020. Moreover, Google Playstore isn’t officially allowed in China, though there are ways to access it. As a result, China is a flourishing hotbed for alternative app stores that aim to provide a vibrant ecosystem of apps to the Chinese consumers.

Ruling over 25% of the total android apps market in China, Tencent’s MyApp is China’s biggest app store. it has a fairly tight screening system for apps and requires developers to submit Software Copyright certificate.

Primarily China’s main search engine, Baidu also has an app store that now also supports an English-language version. Not only does the Baidu app store have a wide reach but also one of its defining advantages is that it is China’s biggest search engines, offering apps a massive visibility in search results.

The leading smartphone manufacturer have their own app store that comes installed in all their smartphones and offers top android apps to users.

Another one of China’s biggest app stores, 360 Market boasts over 30 billion downloads.

PP Assistant offers Android and iOS apps and is from the house of Alibaba.

An app store as well as a leading Chinese search engine.

MaoPao is one of china’s biggest app stores offering Android as well as iOS apps.

*We will send the checklist to your inbox and keep you updated with the latest trends and insights on app development to keep you on top of your game.
by Hiral Atha - May 31, 2021 Read the Post