How to Make Huge Money with Mobile Apps In 2020 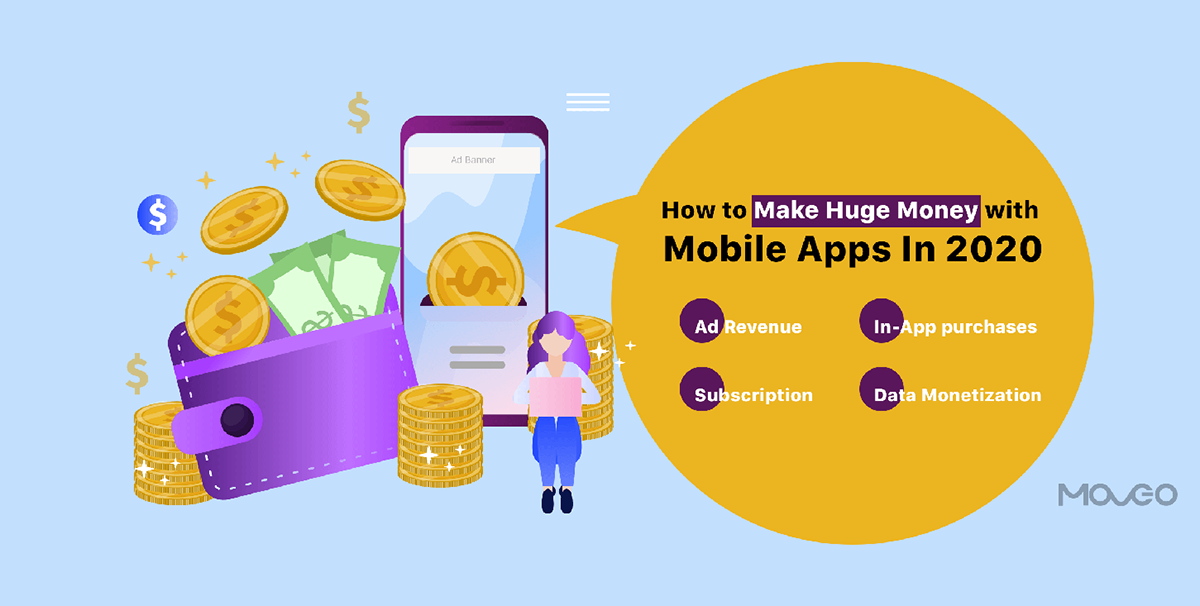 Despite doomsday reports coming in on a loop for a few years now, the business of apps only gets stronger. So yes, without a doubt, mobile apps are still a lucrative business and will only continue to make impressive profits in 2020. With an effective product and a good monetization model, apps can tap into the increased spending power of millennials and make serious money. While it is often said that it’s only the biggest and loudest companies like Facebook, Instagram and Google make money in apps and smaller developers hardly catch a break, the truth remains that newer apps are constantly entering the market and making big money.

The Cash App by Square for example, has earned Square a 1 billion dollar jump in revenue last year, beating the likes of Venmo and PayPal to become the top downloaded fintech app of 2018.

Before you can say the Square too is a big company, we got more examples. The app called Yo, which took creator Or Arbel just 8 hours to develop, has been a wildfire success and made an estimated $2.5 million in total revenue. Of course, a security breach led to the app’s tragic shutdown, showing us how critical it is to ensure security in an app if you’re looking for long term business.

There are plenty of other success stories. There are some really young developers like Robert Nay who made Bubble Ball at just 14 year old, and Nick D’Aloisio who became the youngest venture capital-funded developer ever at the age 15, for his app Trimmer (Later Summly). These young developers made it big with their original ideas and sharp execution.

There is just one caveat though – you have to be good. Mobile apps have really set the benchmark high over the last few years, effectively transforming everything from communication to shopping, travel, payments and so much more. The common man’s relentless thirst to save a little more time and make things a little more easier fuels the way for developers to come up with newer,  more innovative solutions that are faster, better and maybe cheaper. Even though it seems like there is a dearth of new ideas as everything that can be invented, has been invented, there really is no limit to making things better and more efficient. And as long as you do that, your app will make money, lots of money. All you need is a product that offers true value, and the right monetization strategy. And while historically, ad revenue, in-app purchases, affiliate marketing, and direct download charges have been a big way to make money with apps, newer models like the subscription model and commission-based apps have paved new roads to the money.

After ensuring a truly engaging app that can bring in and keep users, choosing the right monetization strategy will help you maximize your revenue. So here’s a look at the most proven ways to make money from your app. Take a look at each and you can use one or a combination of more strategies to make the most money from your app.

When it comes to monetization, ad revenue has historically been the most successful strategy. Ad revenue is the reason we get our full-color 12-page morning newspaper for a few cheap dollars, and a ton of high-quality journalism absolutely free online. When it comes to apps too, ad revenue has made businesses the most amount of money. According to a survey by Sweet Pricing, over 65% of app developers preferred advertising as their monetization strategy in 2017.

So here’s how you can do this. Services like Google AdSense or Google AdMob automatically read the text and other content on your app to place the most relevant and suitable ads on your app. You then get paid for every click that the ad receives. As your app becomes more popular and more users download it, clicks increase and so does the revenue. You can sign up for free and let AdSense decide the number of ad slots on your app pages. It is advisable to max out the number of slots available to you to increase your revenue. Be sure to maintain the aesthetic of your blog however, to keep your users engaged.

According to a report by Apps Flyer, only 5.2% of all app users spend money on in-app purchases, but that the average paying user spends $9.60 in monthly transactions per app with purchase activity — more than 20 times the average spend of all users combined. In-app purchases are widely varied in nature and appeal to users in a big way. The idea is to offer a free app and make the users fall in love with the app experience so that they are encouraged to spend money for additional benefits. Extra lives in a game, better features, unlocking premium content and much more – developers have used immense creativity to make app users spend money in apps.

You too can make this work by offering a basic value-added experience free for your users. No matter what your app does, be it a game, an organization app, a video sharing or messaging app, or office tools such as organization or storage apps, you can get the users hooked by offering plenty of value without charging anything upfront. Once the users see the value and become regular users, you can offer better and premium features at a cost. Price your in-app purchases appropriately. You can check out this insightful analysis by Claire McGregor of Growthbug.com to know more about in-app purchases costs and trends.

The word subscription is synonymous with a steady cycle of revenue, month after month or year after year, and to any business owner, there is really nothing more attractive than a steady stream of revenue. That is why the upsurge in subscription economy over the last few years hasn’t surprised anyone. Netflix, Amazon Prime, music streaming apps, even content apps like Medium and LinkedIn are now going the subscription route and doing great for themselves. Netflix for instance made a total of $16 billion in 2018, clocking a net profit of $1.2 billion.

If your app falls into the category of apps that offer new and entertaining content month after month, you could begin charging your users a monthly fee. That is something you will have to deliberate and strategize. There are apps like Hotstar that offer some content for free and other on subscription, while there are apps like Netflix that are entirely based on a subscription fee.

Within the boundaries of privacy laws, there is a lot of non-personal and non-sensitive anonymous data that apps can share with data-hungry companies looking to understand the demographics of a certain category of app users. Data monetization emerged as a great new trend in 2019 and you could very well leverage this to make additional revenue for your app. Common parameters of such data include a device, operating system, region, version, screen size, and other such attributes. You can then sell this information to data collection companies. Normally, these companies look to collaborate with apps that have more than 50,000 DAUs so work on building your user base first and once you have enough daily active users, you can turn a decent profit with data monetization.

So there you have it – 4 sure ways to make money from your app. There are other ways like sponsored content, paid sister apps and of course, the paid app. The above 4 monetization practices are however, largely universal and can be used by anyone to turn their app into a steady business and a regular stream of income. Do note that the success of almost all these practices depends on the number of users your app can attract, so always, engage first and monetize later. Spend a good deal of time developing a practical, useful app that users love to use and regularly find value in. having done that, your app will continue to generate impressive revenue as long as you use one or all of these monetization strategies on your app.

Want to build an app that makes money?

An app isn’t just a piece of code. When done properly, an app is a successful business that can make millions. Schedule a free consultation today to find out how that idea in your head can make real money.

*We will send the checklist to your inbox and keep you updated with the latest trends and insights on app development to keep you on top of your game.
by Hiral Atha - Oct 31, 2019 Read the Post