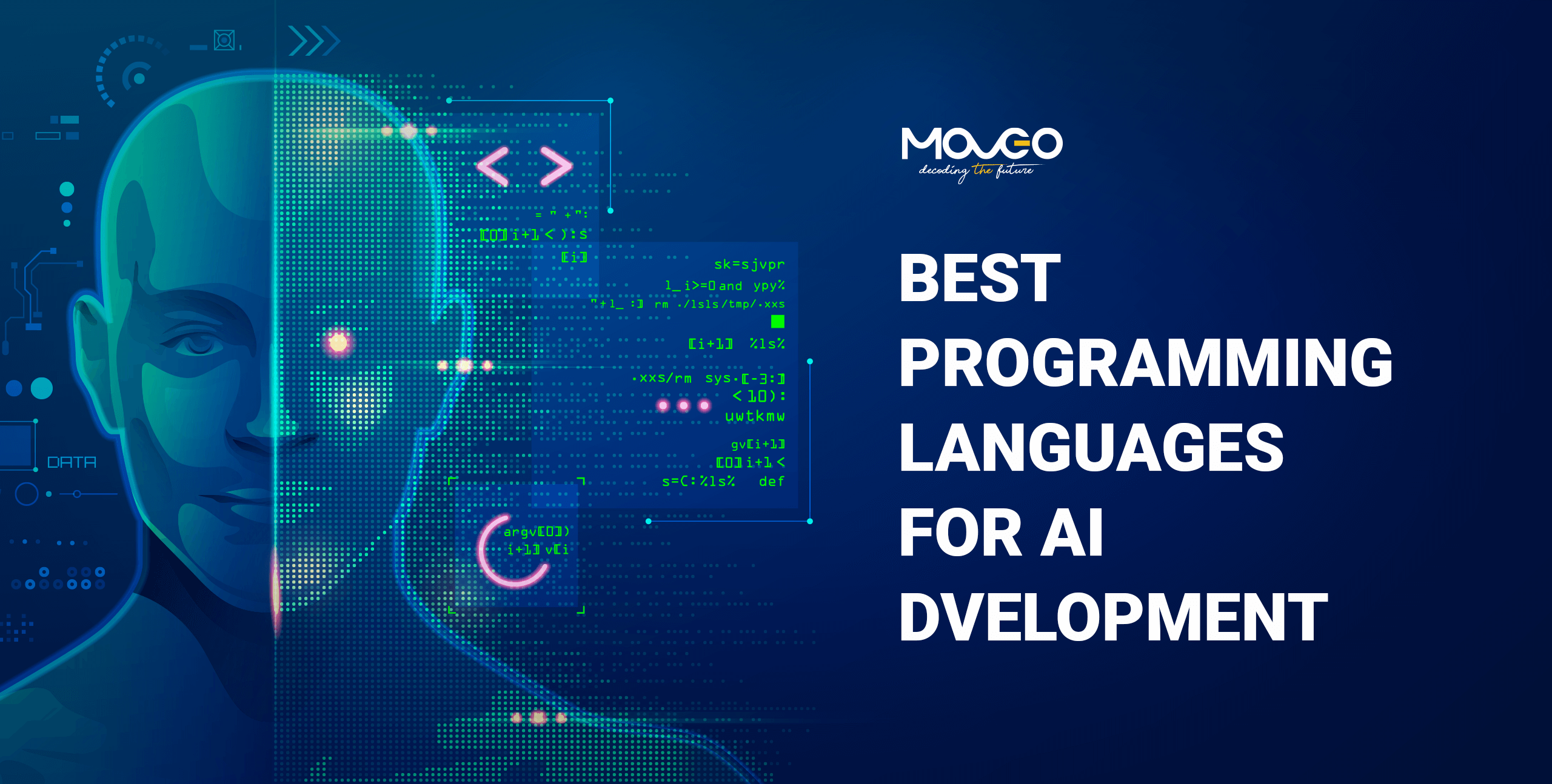 Artificial Intelligence is increasingly a part of your everyday life, whether you notice or not. Gartner predicts that AI software will be worth $62 billion in 2022 alone, increasing 21% from 2021. Artificial Intelligence has far-reaching applications in numerous areas such as customer service, marketing, ecommerce, education, travel, and even hospitality. Today, 51% of ecommerce companies use AI to provide their customers a high quality user experience.

Python tends to top the list of best AI programming languages, no matter how you slice it up. The fact that it has been around for so long and has consistently performed well as a general purpose programming language that can be used for front-end or beck-end development. It is easy to learn, produces clear, streamlined code, and works well for new as well as experienced developers. With a clearly defined syntax and simple English keywords, Python is highly readable, and easy to learn.

When it comes to artificial intelligence, Python comes out strong thanks to its wide variety of pre-designed libraries that are particularly useful in artificial intelligence development. Basic AI algorithms like regression and classification are expertly handled by Python’s Scikit-learn. Similarly, libraries like Keras, Caffe, and TensorFlow handle deep learning with finesse, keeping AI development with Python perfectly streamlined and easy. Many other libraries like NumPy, SciPy, Matpolib, SimpleAI and more, make Python one of the most accessible programming languages to work with.

Even when it comes to natural language processing which is so integral to user experience today, Python has an edge thanks to tools like SpaCy and NTLK.

With its simple syntax, abundant libraries, flourishing community and concise coding, Python remains a highly effective AI development programming language. Developers use it as it allows them to focus on important aspects of development such as innovation, problem solving and design thinking, while the simple syntax and an arsenal of libraries handle the coding complexities.

One of the most widely used programming languages in the world, Java has unique qualities that make it a top contender among the best AI development languages in 2022. In fact, it has been so for a long time now. Java is an object-oriented programming language that offers easy debugging and simple syntax. Having a proven track record in software development, mobile app development and now even AI development, Java continues to win over developers with every new generation.

Artificial intelligence programming hinges on quick execution and fast runtimes, both of which happen to be Java’s superpowers. It offers excellent production value and smooth integration with all key analytic frameworks.

Thanks to its Virtual Machine Technology, Java is exceedingly easy to implement on a variety of platforms. This means that once you AI application is written and compiled on one platform, you can run it on other platforms easily with the write once run anywhere methodology. That is why a majority of the open-source big-data stack is written in Java Virtual Machine.

Some of Java’s biggest advantages as an AI programming language include its ease of use, fast debugging, portable memory management, and its versatility. It can help develop everything from data analysis to natural language processing, deep learning, machine learning and so much more.

The java community is rich and active, allowing plenty of support for new developers and creative enrichment for seasoned developers across the world.

A number of AI applications involve big data and crunching of big numbers. Did you know that a special language was developed just for the purpose of statistical computing? That’s right, R was created by statisticians just for performing computations and crunch massive data sets with ease in a matter of seconds. Today, R is a powerful language used for machine learning programming applications, and any artificial intelligence applications that involve extensive computation or data analysis.

Most AI development involves extensive data analysis which is why R is a powerful AI programming language that is used widely in domains such as finance, medicine, sociology and more. It supports a range of libraries such as TensorFlow, MXNet, Keras and more. It leverages CARAT for classification and regression training, randomForest for decision tree generation, and much more.

One of the biggest strengths of R is its interactive environment that facilitate rapid prototyping and exploratory model selection.

Another highly reliable object-oriented programming language that has vast applications in AI development is C++. Its rapid processing speed makes it of particular interest to complex machine learning models as it allows them to run with high efficiency. C++ boasts some extremely useful attributes. It generates a compact code allowing modules to run with high efficiency. It is a statically typed language which means type errors don’t appear during runtime. C++ also offers dynamic load balancing, adaptive caching, memory management and a host of other features that make it a highly favoured AI programming language.

Did you know that C++ holds the title for the ‘Fastest programming language? That’s right. developed way back in 1983, C++ hold`s special importance in AI programming. The speed is definitely a big advantage.

Although C++ does have a slightly more complex syntax than other AI programming languages and hence a bit of a learning curve, which does bother some beginners, but once you get past the learning phase, C++ offers some unique advantages in artificial intelligence programming.

Despite being relatively new, Julia has garnered attention from the development world and already has a flourishing community as well as an ecosystem of machine learning libraries like TensorFlow.jl, Scikitlearn.jl, Flux, Mocha.jl, and many more.

An interesting feature of Julia is that it can easily translate algorithms directly from research papers into code, allowing reduced model risk and increased safety. It is a high performance AI programming language built for modern AI applications and is ideal for developers with a background in Python or R.

Haskell’s winning attribute is safety and speed. Haskell is a purely functional, modern AI programming language with far reaching advantages in Artificial intelligence programming. It has advanced features such as type classes that enable type-safe operator overloading. Other features include lambda expressions, type classes, pattern matching, type polymorphism, and list comprehension. All these features make Haskell ideal for research, teaching and industrial applications. Thanks to its flexibility and error handling capacity, Haskell is one of the safest AI programming language.

Prolog has been around for a long time, as long as since 1972. However, instead of calling it an old language, experts would call it a well-aged, mature AI programming language. It is a logical, declarative programming language developed for natural language processing. How good it is at that job can be understood by the fact that IBM Watson uses Prolog in parsing natural language in fielding human-generated questions.

In Prolog AI programming, the programmer specifies a set of rules or ‘facts’, and the end goal. Prolog then finds the connection between the two and proceeds with pattern matching to produce desired results.

LISP is probably the oldest AI programming language. In fact, the very term Artificial Intelligence was coined by John McCarthy, the inventor of LISP. It is one of the most flexible programming languages with automatic garbage collection, quick prototyping abilities, dynamic object creation, and support for symbolic expressions. LISP was used to express the earliest AI programs such as ELIZA.

Over the years, LISP has lost some of its popularity owing to some of its inherent flaws. However, it did lay the foundation for earl AI development and remains a great language to learn for a primer on how the world of Artificial Intelligence evolved.

So those are the 8 most popular AI programming languages developers can learn and work with in 2022. Which one of these is best suited for your next AI project would depend on what your project is about as well as your background and level of comfort with the different AI programming languages out there. If you need some support figuring out which of these is perfect for you, get in touch with the engineers at Moveoapps for a free consultation and we’d be happy to study your project idea and determine your best fit.

*We will send the checklist to your inbox and keep you updated with the latest trends and insights on app development to keep you on top of your game.
by Hiral Atha - Apr 7, 2022 Read the Post