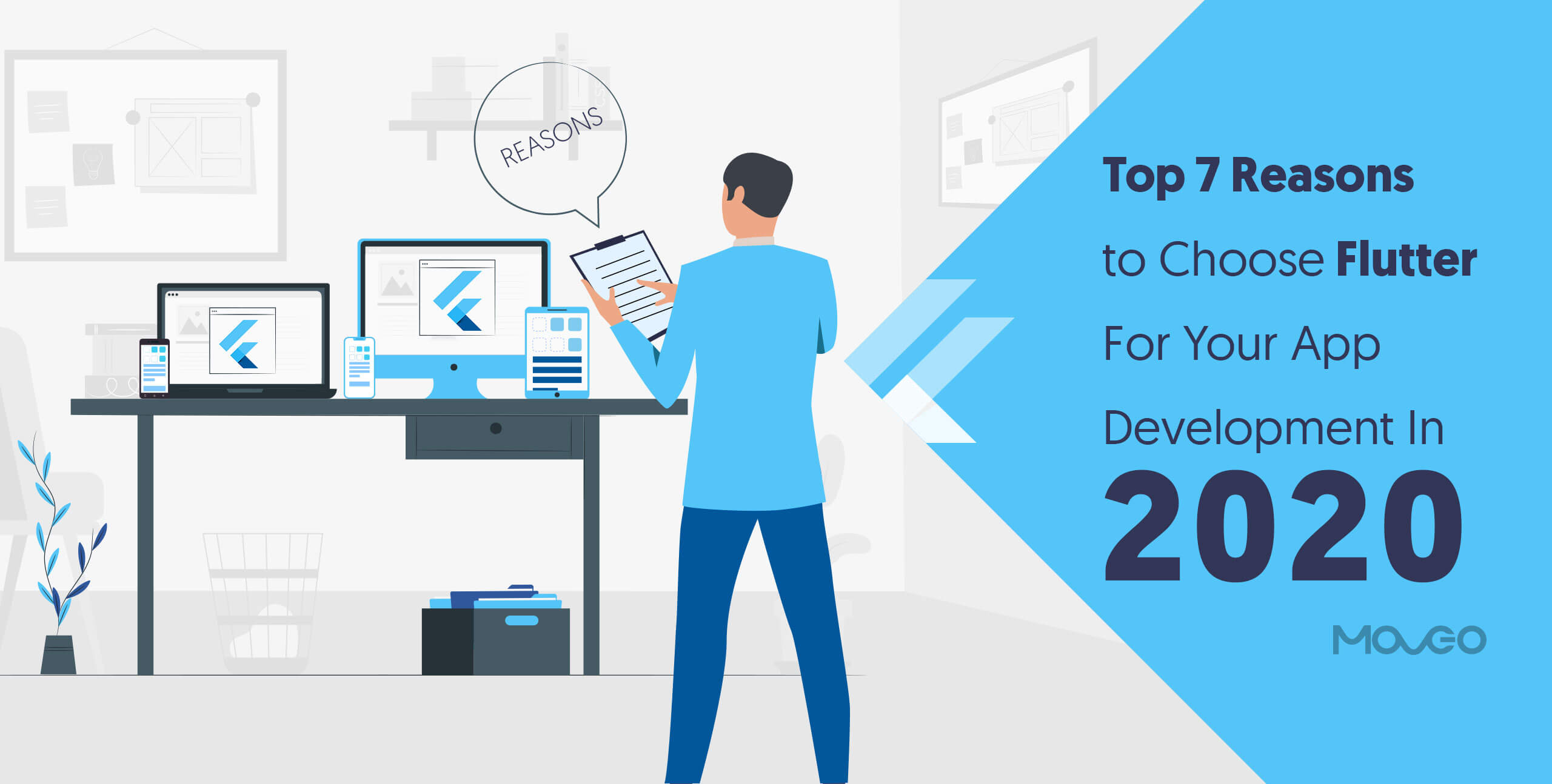 The tech world has been abuzz with talk about flutter the last year, hailing it as the game-changer in cross-platform apps. Right from the time Google launched Flutter, some of the best companies including the likes of Tencent, Alibaba, Hamilton Music, and Reflectly have developed apps with it and speak volumes about how it has helped their business. As we speak, the number of apps built with flutter is growing in app stores and flutter is becoming a topic of much excitement. As a business owner, what does all this mean to you? Can flutter help you take your business forward? Should you choose a flutter app development company as your development partner in your mobile app project? How does flutter fit in better with your business goals? That is exactly what I am here to tell you today. Read on to find out the top 7 ways flutter can help you develop better, faster, more beautiful apps that give you immensely high levels of performance without breaking the bank, making it The Framework you should choose in 2020.

As an app owner, getting the app to market as quickly as possible is one of your primary concerns. Well, take heart because that’s precisely what Alibaba, Tencent, Dream 11 and many other companies loved about Flutter.

“Flutter significantly reduced the time we need to develop a new feature from 1 month down to 2 weeks,” says Bruce Shen of Alibaba.

“With Flutter, the iOS version of our app was ready in 2 days!” says Anil Sharma of Dream 11.

Now isn’t that exciting? You get to speed up the development cycle and get your app out to people that much faster. Flutter makes this possible thanks to its revolutionary Hot Reload feature. This means that your developers can make changes to the code and see the results in almost realtime. They can fix bugs, try new elements, anything really, and it takes less than a second to see how it works out. You don’t have to wait, reboot, or reload the app to see the effects.

Another way Flutter makes app development faster is by streamlining designer-developer collaboration. What the designer envisions and how the developer makes that vision come to life has been a place of conflict in app development forever. Flutter eliminates this friction by enabling designers and developers to work together and try different options in real-time to come up with solutions that work. ‘Make it a pixel smaller’, take it a little to the right’, ‘make the animation slower’ –  anything you change becomes visible right up front, allowing plenty of room for the experiment without lengthy reviews and reworking.  The result – Flutter helps you complete your app development faster than your competitors and lead the market with a timely product, not to mention the cost savings.

2. Write One Code for All Platforms, Save Time and Money

Native applications are the pinnacle of quality and performance in app development. We’re not contesting with that, but native app development requires writing two sets of code from scratch for two different platforms. That is time consuming, tedious and expensive to say the least. It is in fact akin to developing two apps and costs as much too. This is in fact one of the biggest reasons companies thought twice before venturing into mobile apps until cross-platform technology caught up.

Flutter makes cross-platform app development possible without compromising on quality. From design to features and functionality, Flutter makes it possible to achieve the highest quality and near-native experience without having to develop separately for different platforms. This is definitely a game-changer for app owners who needed a cross-platform app but were afraid anything less than native quality will affect their business.

And you know why that’s important, right? Ain’t nobody got time for an app that takes any more than 2 seconds to load up. Flutter lets you develop rich, full-featured apps loaded with functionality at super-speed so you can reel in your users right from the moment they launch, immersing them in the experience you have to offer. It does so thanks to many different technologies built into a flutter. First of all, the makers of flutter worked on developing a fast Renderer that renders at the speed of 60 FPS, aiming for 120 FPS. Also, flutter uses Dart, a new and modern programming language by Google that is compiled ahead of time in native code, giving flutter apps an edge in performance speed. Also, Flutter has a special layout model called the ‘silver layout model’ that is so fast it can be used for scrolling. All this and more features like custom UI widgets make flutter apps faster and smoother than the competitors.

If you’ve ever dealt with coding, you know the monster that testing is. The quality assurance stage of app development can be trying to the most patient of app developers and stakeholders. When you have the same code for two platforms however, testing is much faster and your developers are less worked up, leading to an overall increase in productivity and performance. Moreover, the aforementioned Stateful Hot Reload makes big fixes faster, almost real-time, leading to a further drop in testing time.

Flutter helps you build apps that are breathtaking in terms of visual appeal and UI design, thanks to its customizable Widgets. Now that Material has adopted Flutter as its first-class platform, Flutter’s rich set of Material Design widgets and Cupertino widgets and behaviors enables your app to look and feel natural and native. Thanks to its platform-specific scrolling, functional reactive framework, navigational patterns, rich fonts and much more, you can integrate powerful interfaces making your app look like a true experience that reflects mature branding.

6. Your App Looks the Same on Older Devices Too

As flutter runs flawlessly on Android Jelly Bean and newer versions, you incur no extra cost for supporting older devices on your flutter app. This enables you to make all your customers happy, without alienating those who are using older devices.

Despite being a new entrant, flutter has an abundance of libraries to help you achieve any level of functionality in your app. Moreover, onboarding new developers is extremely easy in flutter, giving you a remarkable level of freedom in choosing developers for your app. Since Google is pushing Flutter so valiantly, they have made it a point to prepare excellent documentation for flutter, with every feature, functionality, and practice documented in enormous detail, making it easy for new developers to get on board swiftly.

So those are seven truly compelling reasons why choosing Flutter as your app development framework would prove to be a great choice you make for your business in 2020. To put it simply, you get a high quality, beautiful app that costs less and is ready is record time. What more could you ask for?

Ready to build your app with flutter yet?

MoveoApps has a team of the most skilled and experienced flutter developers who can build an app for you in record time to market. Get in touch for a free consultation today!

*We will send the checklist to your inbox and keep you updated with the latest trends and insights on app development to keep you on top of your game.
by Hiral Atha - Jan 29, 2020 Read the Post