What’s the Big Difference between B2B and B2C Mobile Apps? 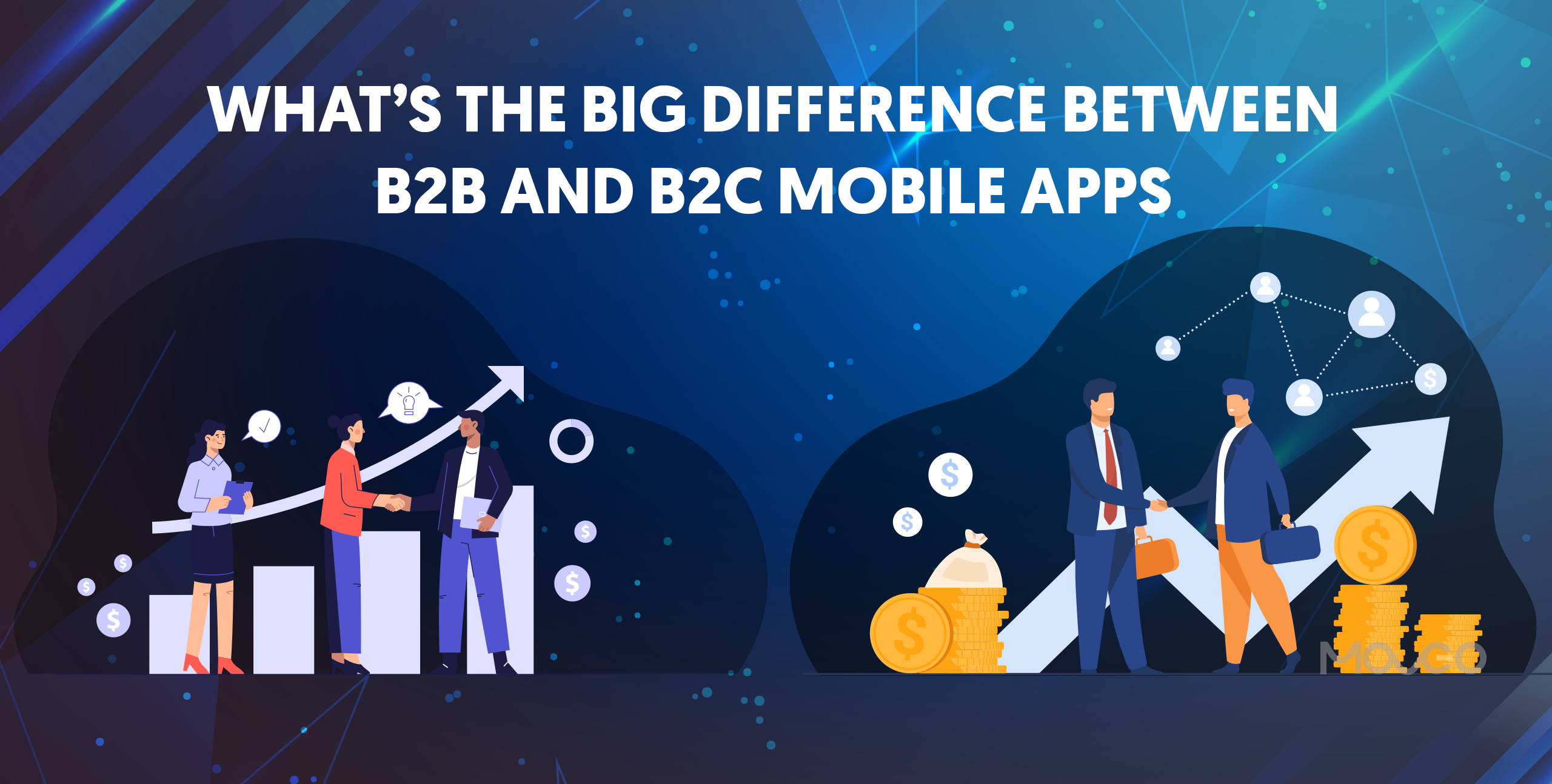 Knowing your target audience is the single most important thing you can do before anything you put out in the world – a business, a cuisine, or a mobile app.

Especially a mobile app, which is often a business, and sometimes, something even more important. When you decide to build an app, who you are building it for is a key determinant of everything that goes into the app. From its UI/UX design to its features, terminology, even its name – everything must be designed according to the target users.

And of the different types of target users, the broadest classification you need to make is the difference between B2B apps and B2C apps.

What are B2C apps?

Business to consumer or B2C apps are the most common apps you’d find in app stores. These apps are intended for individual use by end point customers. Usually for entertainment or utility purposes, B2C apps perform a range of functions for users, from buying things to doing their taxes and everything in between. Uber, Airbnb, Bonobos, and more – there are almost 9 million apps in the world so you could choose your own examples.

What are B2B apps?

Business to business or B2B apps are aimed at other businesses. So you build an app that another company or staff or office will use to either run their business or perform their work-related tasks better. Inventory management apps, point of sale apps, enterprise apps, sales apps and a myriad of other apps can fall into this category. Asana, Hootsuite, Salesforce, Mailchimp and several other apps that you’d only hear about in business environments fall under the category of B2B apps.

What are the differences between B2B and B2C apps?

As we said above, there are differences in terms of design, execution, feature sets and much more between B2B apps and B2C apps. The consumer psychology behind these apps is what drives the differences. B2C apps serve a different set of needs and expectations than B2B apps. Let’s take a look at some of the key differences.

B2C apps need to be simple

And by prettier we don’t mean rainbows and sprinkles. We’re saying that B2C apps must be designed for use by the simplest of users. Whether your user is a law graduate or a high school drop-out, the user interface must be clear and simple for anyone to use.
When it comes to B2C apps, options are many. Way too many. There are over 2 million apps on the app stores and for every purpose that an app can serve, there are several apps at the ready. Any app that throws the slightest bit of complexity at the user risks being abandoned for another app that simpler.

B2B apps on the other hand are targeted at a specific group of individuals working for a company. These people are professionals with experience, presumably really good at the very thing the apps are meant to do. As a result, B2B apps can handle a certain level of complexity. They can use business related terminology and jargon, while B2B apps must strictly refrain from all jargon. B2B apps can have a learning curve, because when being used for ‘work’, you can reasonably expect the B2B users to take the trouble of learning.

The way B2B and B2C apps acquire users is very different from each other.
B2C apps are discovered almost exclusively through app stores, and sometimes through online ads. Word of mouth from family and friends of users too plays a role, albeit a really small one.

So increasing discovery of your B2C app hinges on app store optimization, user reviews, star ratings and social media buzz. Youtube ads and even TV ads are used to spread the word and attract people towards your app. Plenty of banner ads and interstitial ads are in play. The idea is to gain as much visibility as possible. The crux of B2C marketing lies in acquiring a large number of individual users, the more the merrier.

B2B apps on the other hand follow a more internal path of pollination. You need to get the word out through trade shows, professional journals, and networking. Word of mouth plays a large role in getting your B2B app noticed. You need to impress key decision makers of a business who are bound to amply deliberate before giving you a nod.

Therefore, when it comes to acquiring users for a B2B app, you need a strong sales cycle. B2B users don’t just download and app ad then try it on. They vet the app first and need to be really convinced of its capability before getting on board.

As a result, marketing cost per lead is much higher in B2B apps than in B2C. At the same time, once you impress a B2B buyer, you stand to win a large account instead of individual users, so the return on investment is proportionate.

As is evident, B2C apps are downloaded for personal use. Most often, these uses revolve around entertainment, shopping, keeping in touch, wellness, etc. How long and how often these apps are used can depend on many emotional factors like mood, time, season, opinions of friends, brand reputation, trendiness and more.

Even the decision to download an app or uninstalling it at any time can be triggered by emotional and personal reasons that may sometimes be out of your control.

As a result, your B2B app has to compete with not only other apps but also non-empirical factors as stated above.

Whether to rekindle a certain kind of mood, or to create a sense of urgency, user emotions strongly guide the designing process of B2C apps. Designers use colors and layouts that bring a sense of calm, or micro-animations that spark a user’s childlike delight. They use big bold colors and flashing/blinking buttons to add a certain sense of urgency in some sections of the app like the ‘buy now’ button. All of these design principles are rooted in user emotions.

B2B apps are largely devoid of emotion and focus on getting the job done in a professional manner.

That does not however mean that B2B apps can be bland, colorless and designed with an obtuse cookie cutter. B2B apps too need to have sleek interface, clear navigation and a reasonably pleasing aesthetic.

What we’re saying is that as long as the B2B app efficiently does the work it needs to do, and saves a business time, hassle and money, it is good to go. Once these attributes impress your clients and you get the account, you don’t need to worry about being uninstalled in a fickle bout of frustration.

What guides the design of B2B apps is their professionalism. The apps must resonate with their target business audience in terms of sophistication, sleekness and minimalism. In addition to getting the work done, the B2B apps must look suave enough for a reputed brand or a Fortune 500 company.

B2C apps rely predominantly on ad revenue, in-app purchases and a small fraction on download charges. The subscription model is gaining popularity but until so far, only big ticket apps like Netflix, Amazon Prime and Spotify have had major success.

B2C apps do not have any currency with ad revenue or in-app purchases. They charge substantially large prices upfront, either one time or yearly.

B2C apps need to be periodically updated, much more often than B2B apps. This is because B2C apps need to be kept relevant and modern to make sure the users maintain interest in the app and don’t get bored away. So developers need to periodically add new features, tweak the design, fix bugs, implement user feedback and a number of related activities just to keep the users engaged and keep up the freshness of the app.

B2B apps too need updates, but much less frequently so. Businesses are more interested in uniformity and would like their apps to maintain a sense of permanency. This does mean that the design must be top-notch to begin with as you won’t get many chances for a do-over.

There are many differences between B2B and B2C apps. The way they are designed, developed, marketed and maintained are all distinctly different in their approach and methodology. As a developer, this means that you need to stay mindful of these differences and plan your development accordingly. As a stakeholder, this means that you ask your developers the right questions before embarking on a long and expensive app development process.

What remains common between B2B and B2C apps is the fact that they are powerful tools that enable, empower and engage users in a way few other pieces if technology can. Whether it is about running a business efficiently or about planning the perfect weekend getaway, quality mobile apps are always in demand and are rewarded handsomely when they do a good job.

*We will send the checklist to your inbox and keep you updated with the latest trends and insights on app development to keep you on top of your game.
by Hiral Atha - Oct 16, 2021 Read the Post