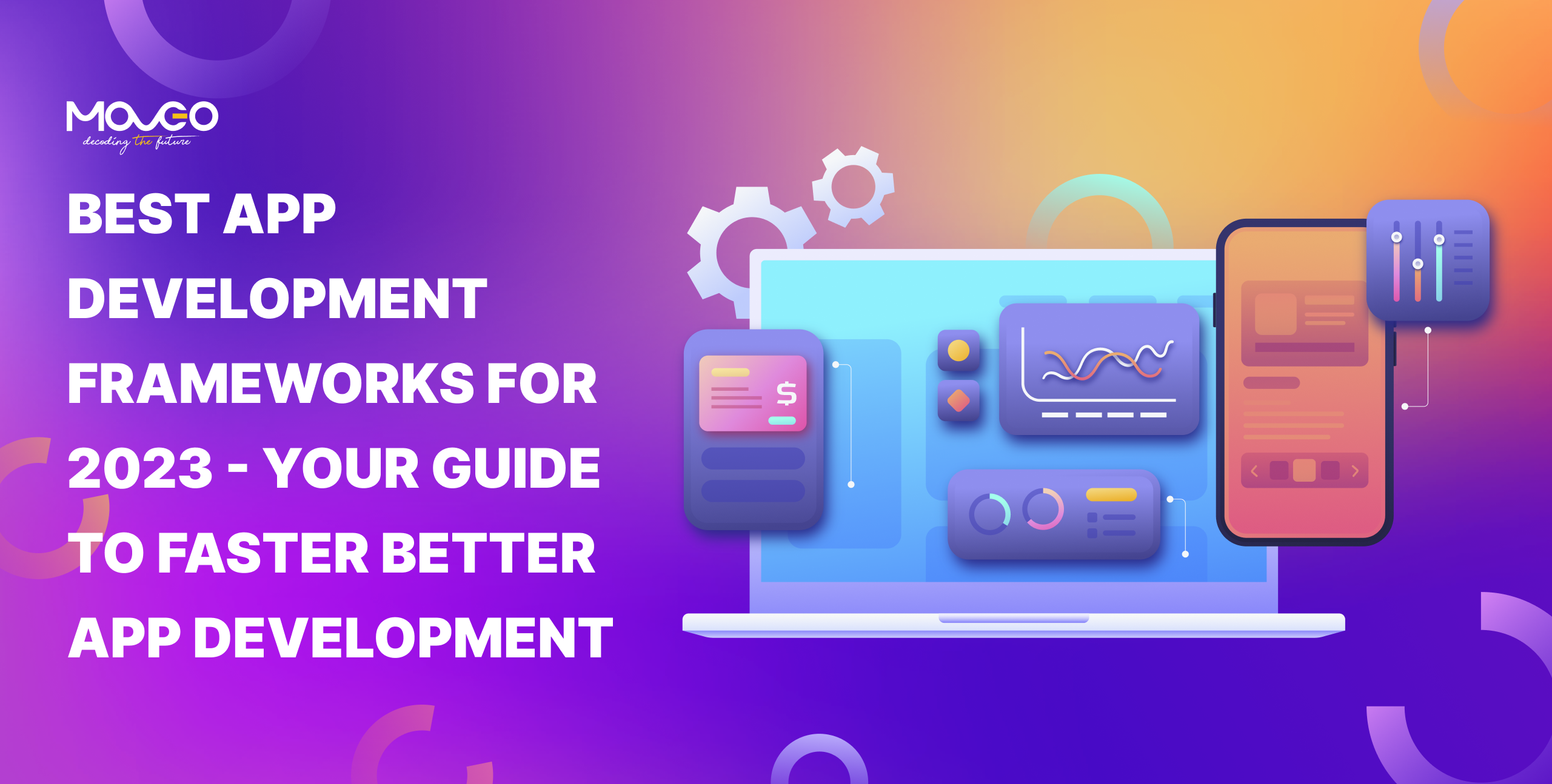 The best app development frameworks in 2023 are the ones that make app development faster and easier, empowering businesses to strengthen their online presence and maximize their reach, without wasting precious time and resources.

Knowing just how popular mobile apps are in today’s world, it’s only obvious that frameworks are evolving to great levels of efficiency, allowing app developers to accomplish in days what earlier took weeks. Choosing the right app development framework gives your business an edge over the competition by making your app high performance and low cost.

Why we need app development frameworks in 2023

Cross platform app development was becoming popular right from late 2016, with Xamarin paving the way and Phonegap, Ionic, Reactive and others making significant breakthroughs. However, erstwhile cross-platform apps – though doing the job – weren’t as smooth and suave as one would expect them to be. Lately however, app development frameworks became much more sophisticated and the result is faster development cycles and excellent apps that look good and work flawlessly on any device.

As we step into a whole new year, mobile and web apps continue to grow stronger than ever, with more and more consumers resorting to apps for their every need. Understandably, businesses rush to develop mobile apps that can meet customer expectations and help their business grow. They want to develop apps that are ready in weeks rather than months, and cost reasonably. That’s exactly what modern app development frameworks give you.

So let’s quickly dive into the best app development frameworks for 2023 that will give your business the digital transformation it needs in the new year.

Flutter is essentially a UI Toolkit that helps develop visually appealing apps with native like performance. It uses the language Dart and come with a number of widgets, which are essentially Lego like building blocks that come together in various ways to build an app of your choice. Features like hot reload let you make precise edits to the code as many times as you like, while seeing the changes reflect instantly. With just one codebase, Flutter development lets you build native, Android, iOS, or web apps. Top notch navigation, scrolling, fonts, and icons make Flutter an instant favourite with developers.

Some of the best features of Flutter are:

Another very popular app development framework that has been and will remain a developer’s favorite well into the future is Ionic. Ionic delivers incredible desktop, web, and mobile apps to help you build rich digital experiences for your audience. It streamlines app development by leveraging the power of the web and letting you build apps that work on Android, iOS, web, Desktop and more, using the talent and resources you already have. Ionic provides unlimited customization and complete control over how your app looks and feels.

Some of the best Ionic features are:

Apps built with Ionic include:

From the house of Facebook, React Native is another app development framework that is going strong. It allows developers to “Learn Once Write Anywhere”, which means you can develop apps for Android, iOS, desktop, or any other platform with just one codebase. Being based on JavaScript makes React Native development all the more appealing to developers as the majority of us have a background in JavaScript. Apps made with RN are highly intuitive, responsive, and fast.

Best features of React native include:

Apps build with React Native include:

One of the earliest players in the cross-platform app development revolution, Xamarin still continues to be one of the popular app development platforms and will remain so in 2023 too. From the house of Microsoft, Xamarin helps develop high-performance apps for all devices and platforms using the C# and .NET software framework. Developers use it to develop apps, APIs, components, backend, and much more.

One platform to look out for in 2023 is going to be Swiftic. With some of the best customer-facing features, it puts a lot of focus on specific needs of small businesses. It integrates with several stores like Shopify and Magneto, as well as social media and digital payments. It ranks high for ease of use among developers as well as offers a great deal of flexibility and design options.

So those are the 5 best app development frmeworks that will help app developers in 2023 build apps that help their clients’ business grow.

Choosing the right framework depends on specific needs of the business and the resources they currently have. Their budget, security concerns, timeline, and other factors all make a difference in choosing the right technology for app development.

When it comes to choosing the best app development frameworks in 2023, you have several options at your disposal. While React Native, Flutter, and Ionic have led this race for the better part of the last decade, Xamarin is the oldest player, and Swiftic is the new promising riser. Either of these will serve your perfectly well in the quest to develop a high performance cross platform app in 2023. What you choose depends only on your specific business needs.

*We will send the checklist to your inbox and keep you updated with the latest trends and insights on app development to keep you on top of your game.
by Hiral Atha - Dec 29, 2022 Read the Post