According to a Bloomberg report, iOS app developers could be seeing a revolutionary change in their lives this year, as Apple prepares to launch a universal platform, tentatively called ‘Marzipan’, that will let them develop just one app and run it across the iOS as well as MacOS. So just one application could run on touchscreen devices such as the iPhone and iPad, as well as mouse assisted desktops and trackpad assisted Macbooks.

At present, developers need to design different apps for use on the iOS and MacOS, leading to long development times and complicated hand-offs, or being limited to a smaller audience. Marzipan will put an end to all such limitations, giving developers a much larger canvas to play with. With Apple’s track record of making far-fetched things possible, it sure looks like Marzipan will be a game changer. A little ways down the road, we could be looking at a single operating system working across the Apple family of devices. 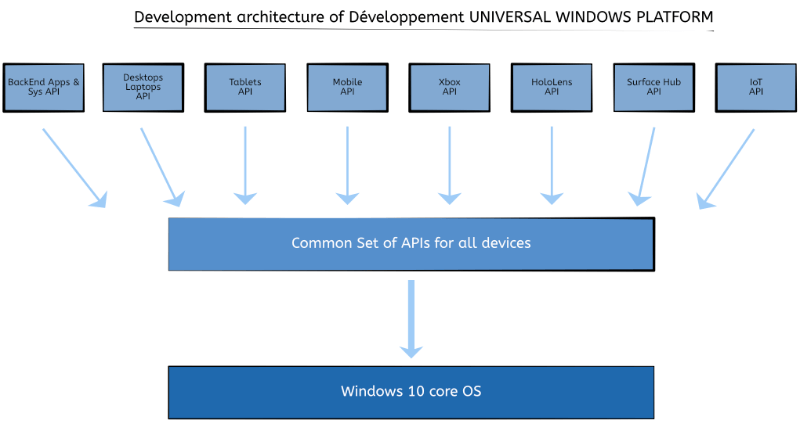 Develop One App For All Windows Devices

With the UWP, windows developers can now build adaptive Windows 10 applications that are very distinct from the earlier ‘responsive’ websites. Now that windows has brought all its devices under the same core, they support a common set of APIs for each device, along with a device specific API, each windows app can be used by a wide audience across devices like smartphones, tablets, laptops, desktops and even Xbox.

Appeal To A Broader Clientele

This is especially beneficial if you consider the fact that smartphones using the Windows operating system are very few. As per Reuters, Windows 10 mobiles have only a 1.3% of the smartphone marketshare, as opposed to 83% of Android and 15% of iOS. Developing an app just for the windows smartphones is therefore not a very rewarding effort on the part of developers. Making their apps accessible on PCs and Xbox allows app developers to reach out to one of the largest and most robust clientele in the world.

UWP deploys the MVVM (Model View – View Model) that offers a clear separation between the app’s logic and its UI, enabling easier application testing and scaling. It sets the stage for effective code reuse and makes designer-developer collaboration much more effective.

UWP Bridges and Toolkits Help Integrate Apps from Other Platforms

Microsoft also aims at enabling iOS app developers to build UWP apps using their existing Objective-C code, with the help of Visual Studio 2015. These UWP Bridges enable certain ‘outside’ apps to successfully run on the UWP, further broadening the scope of app development and reach.

Administrators can now spend less time supporting Windows 10 applications as the UWP platform manages the entire lifecycle of an app, significantly cutting down the time it takes to support and maintain multiple versions of apps. Since each app is uploaded to the UWP as a single package for all devices, the delivery and maintenance mechanism becomes largely consolidated and there’s no longer the need to update different versions for different devices.

Coming Back To Apple’s Marzipan…

So, it is fairly clear that a universal platform is a great way forward. With Marzipan, Apple too can successfully achieve a platform-homogenous app development environment across iOS and MacOS.

Despite the fact that smartphones are now the bigger source of global internet traffic, it is undeniable that most serious work still needs to be done on laptops and desktops, as the smartphones don’t always come through as a professional solution. In this context, it is notable that the MacOS hasn’t seen nearly as much attention as the iOS in the last few years. Though iOS is upgraded every year and the iOS app store is a flourishing place, Macs apps don’t get enough attention. With Marzipan, this would change. MacOS devices too would have a flourish of well-made apps making life simpler for Mac users.

The news of a unified framework has created quite a stir in the iOS developer community. Indeed there is a bit of skepticism, as is to be expected. But the positives far outweigh the negatives. Let’s take a look at all the positives first and then also address the few doubts and see how they can be mitigated.

How Marzipan Will Be A Good Thing For Apple Developers

1. Many Good Developers Will Focus On Mac Too

Innovation and ingenuity has been in abundance in the iOS app store all these years and the result is a steady supply of quality apps. The MacOS however, hasn’t seen much in the way of quality app development in a very long time. Some would go as far as to argue that the Mac App Store doesn’t have the applications you want.

A few people would argue that just a unified framework wouldn’t make developers pay attention to something they’ve ignored this long. But there sure is some merit to believing that a universal platform will encourage at least a few good developers to think – why not?

The point is, many developers have probably always wanted to try and develop good apps for the Mac but wondered if the outcome will be worth the effort. Having to master AppKit may not exactly be rocket science but it is a whole new learning curve, and taking that out of the picture will certainly push good developers to building good apps for the Mac. Developers will no longer have to worry about NSButton vs. UIButton and NSColor vs. UIColor.

Having just one API will undoubtedly make the Mac app store a more buzzing place with plenty of good apps being built and used.

In addition to facilitating homogenous app development on both iOS and Mac, a new unified platform will also lower barriers to entry of new developers. Those who have had a legendary grasp on the UIKit or AppKit for all these years currently maintain a lead, but a new platform would be more conducive to the entry of young blood. Newer developers will lead to more innovation and better apps, resulting in a rich user experience.

Marzipan promises more shared code between the iOS and Mac apps. More shared code would allow developers to focus more on being creative and worry less about writing and testing code over and over again. Less code is always a good thing for developers so there’s little debating on this one.

4. Native Experience Over A Unified Framework

Businesses increasingly seek cross-platform solutions to minimize the cost and latency of developing native apps for different platforms. Over the last few years, various names like Slack, Skype and even Facebook have gone that route, although Facebook recently admitted that it wasn’t their best idea and went back to developing native apps.

Many people think along the lines of Facebook and disapprove of cross-platform apps. Diehard Apple developers would hardy imaging going that route. A universal framework that allows developers to build native apps just once for both iPhone and Mac will definitely please these developers, while saving their time and energy.

Of course we still are in early stages of the conversation and a lot about the Marzipan remains a mystery – yes, even that name isn’t really final. So it’s only obvious that people have their doubts too.

1. There Will Be A Lot Of Sub-Par Ports On The Mac

Many believe that a lot of Mac apps will end up looking like blown up versions of iOS apps, thus ultimately leading to less than stellar experiences. Something similar happened when the WatchOS was launched. Regular apps were shrunk to fit a tiny screen that just wasn’t meant to be dealt with that way. Yes, that might happen in a big way with the Mac too. But that is hardly reason enough to brush away the idea of a unified platform. In due course of time, app developers did begin to design apps that were perfect for the watch and it will happen for the Mac too. Change takes time, but change is always good.

2. Some Businesses Will Be Affected

Businesses that have been on both platforms in a big way for a long time, and have a really strong legacy code – such as Photoshop and BBEdit – will definitely scamper to update each line of their code. However, there will probably be a very generous grace period to help those legacy apps cope to the new platform. Also, some businesses that do charge their customers twice for using their app on two devices will probably not be able to charge twice on a unified platform, but that might still be a good think for the overall market.

So as you see, sure the doubts exist, but there’s nothing that can’t be dealt with. The positives definitely outweigh the negatives and in totality, Marzipan will definitely be a thing to look forward to. We can expect more clarity in the WWDE as early as June 2018.

Do you think that a unified platform will be great for your business? Or is it just an invitation to more sub-par, shrink-to-fit apps? Do share your thoughts with us in the comments section.

*We will send the checklist to your inbox and keep you updated with the latest trends and insights on app development to keep you on top of your game.
by Hiral Atha - Feb 13, 2018 Read the Post