MEAN Stack vs MERN Stack? How to Choose the Right Tech Stack 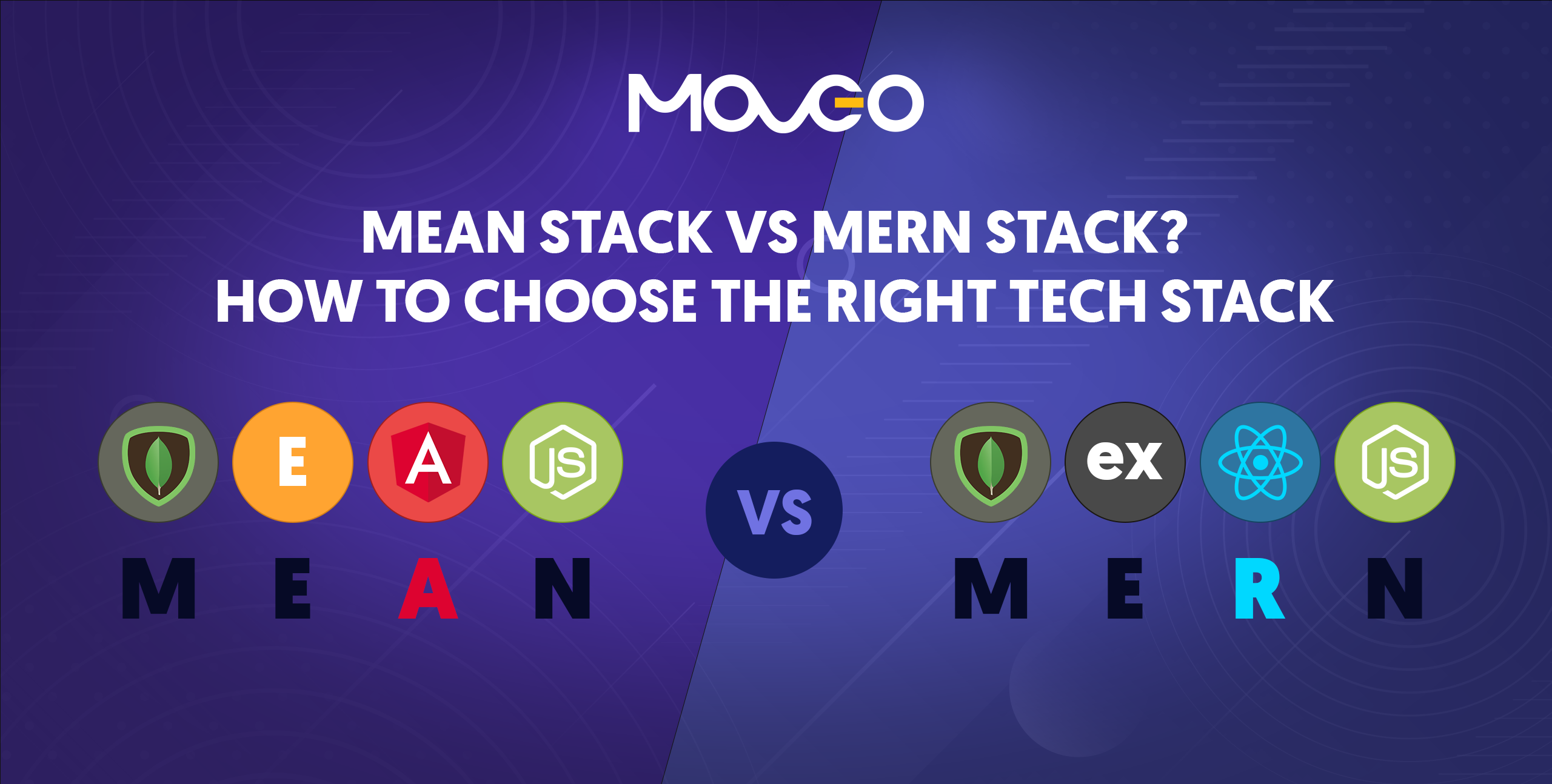 Have you lately found yourself comparing technology stacks and deciding which one’s better for your project? When it comes to developing an app, you need to choose between MEAN stack and MERN stack, and your decision dictates everything from how long your app takes to build, who you need to hire, what it looks like in the end and what it can accomplish.

So what are the key differences between MEAN Stack and MERN stack? Which one should you choose for your business? Let’s take a look at what each of these entail and what they do for app development.

The challenge – choosing the right technology stack for your app development

An app experience – mobile or web – is far from a monolithic structure. Apps are built using a set of programming languages, frameworks, libraries, plugins, tools, databases and much more. The permutations and combinations of different tools produce entirely different results.

Depending on your specific outcome needs, your business requirements and many other factors, you choose a specific combination of technologies and this selection is called your technology stack. What tech stack you use depends on factors like:

When taking on an app development project, you do not want to rush through the process of choosing your tech stack. Careful deliberation is the key to building your app cost-efficiently and get the results your business needs. The wrong tools can result in extended timelines, frustrated developers and heavy maintenance costs as well as buggy app performance – something your business cannot afford.

To that end, two of the most popular app development technology stacks are the MEAN Stack and MERN Stack.

MEAN Stack is one of the very popular full stacks among app developers in 2021 and is poised to remain so through 2022 as well. The MEAN stands for MongoDB, Express.js, Angular and Node.js. Developers use MEAN Stack for developing versatile mobile and web apps. It is an open-source technology stack based on JavaScript.

Being a JavaScript tech stack, MEAN stack can be used for developing all kinds of applications ranging from native and hybrid mobile apps to web apps. It uses Angular JS which is a structural framework for some of the most dynamic mobile and web apps. The MEAN stack includes all the tools and plugins needed to make app development a smooth and quick process.

Some of the key advantages of MEAN Stack are:

Easy on the pocket: MEAN stack is cost efficient for startups and small businesses. Being open source and JavaScript based, it lowers development cost as well as ongoing maintenance.

Isomorphic coding: MEAN stack allows isomorphic coding which means you can easily take code written in one framework to another. It enables easier data flow across components on both client and server side as it uses a common language for both.

Scalability: MongoDB features like auto-sharing, high availability and replication make MEAN stack exceptionally conducive to scaling up application as your traffic grows with time. MEAN Stack helps you easily scale all the front end and backend layers along with the database.

Security: Keeping your application secure from cyberattacks should be one of the top priorities for businesses. The 2020 McAfee mobile threat report states that half of mobile threats in 2019 came from malicious apps. MEAN stack gives developers all the essential security tools to keep their app safe from malicious threats.

Easy Switching: using the same language on both server side and client side means that developers can easily switch between the two sides enabling quick development.

What is MERN Stack?

Another technology stack close on the heels of the last is the MERN stack. With MEAN stack’s Angular being replaced by ReactJS, MERN stack stands for MongoDB, Express.js, ReactJS and Node.js.

Easy learning curve: Developers familiar with JavaScript and JSON can easily get on board with MERN stack without much ado. The easy learning curve reduces training time and gives businesses access to a wider pool of developers, ultimately leading to a good product.

Flexibility: With its open source nature and no licensing disputes to worry about, MERN stack offers flexibility to choose your choice of development tools, components and frameworks. You get to build and customize your app any way you like and end up with a high quality, high performance product. The JS stack gives developers the flexibility to build pages on the server as and when required.

So MEAN or MERN: What should you choose?

Having familiarized yourself with the key advantages of both the MEAN stack and MERN stack, it’s time to get to the important question – which one should you choose for you application development?

What you choose depends on the developers available to you, their familiarity with each of these stacks, your preference for Angular or React, and other aspects.

The Angular vs React debate is an ongoing one and at the core of the MEAN vs MERN debate. While Angular has had its big share of glory, React seems to be leading the charts now and is definitely a hot favorite among developers. This is evident in the 2020 HackerRank Developer Skills Report which shows 32.3% of developers want to learn React while 27% feel the same about Angular.

This could indicate that MERN stack is enjoying higher popularity at the moment thanks to its association with React.

For most projects though, choosing between MEAN stack and MERN stack depends on more than the flavour of the season. Let’s take a look at the key differences between the two.

So let’s roundabout some of the key differentiators between MEAN stack and MERN stack to find out which one better serves your business requirements and which you should choose.

For the three common elements in MEAN and MERN, MongoDB, Express.js and Node.js. pose no differences. The learning curve for MEAN stack and MERN stack therefore differs between Angular and React. Since React is based in JavaScript, it is easier for most developers to get on board with. Angular uses TypeScript so if it comes to splitting hairs, it is MEAN that might throw you a bit of a learning curve.

Angular is a complete framework that gives developers a more well-rounded development experience. This adds a few points to MEAN stack for profitability. React libraries sometimes involve third party libraries that can chip away at designer productivity and add more exertion. Angular CLI makes it easier to redesign your code and enhance designer productivity.

Once again, Angular gives developers the benefit of being a complete, well-organized framework, making it significantly easier to upgrading your code and handling post-launch maintenance.

Angular allows for separating the database related code from the UI related code. React on the other hand imparts more exertion due to third party libraries being involved.  Thus, MEAN stack better assists the MVC architecture and makes for a smoother development experience.

For mobile app development, MEAN brings in the Ionic framework allowing you to build hybrid mobile applications. This lets you keep development costs in check as you can use one codebase for iOS and Android. However, hybrid apps built on MEAN don’t always live up to the native app experience. MERN on the other hand leverages React that is famous for building near native app experiences, adding a huge plus to end user experience.

So if native experience is a priority for your application, MERN might be a more favourable option.

Testing is an important factor to developer experience. In that regard, Angular holds the higher place as it is easier to test as compared to React. Angular only requires one tool – Jasmine or other – to perform complete testing. React on the other hand needs a combination of several tools, adding again to developer exertion.

While in many areas such as scalability, testing, code upgrading and profitability, Angular holds the upper hand. React on the other hand offers two major advantages – easy learning curve and closer to native experience.

So if you are old school and enjoy the unified development experience of Angular, you may invest more time in learning Angular and choose MEAN stack.

If you prefer the easier learning curve and prefer the native experience of React apps, MERN is your answer.

In the end, it all boils down to personal choice when choosing between MEAN stack and MERN stack. Now that you have a firm grasp on the advantages and specific attributes of each, you can take a good look at your project requirements and decide which one better suits your business. If still in doubt, get in touch with the engineers at MoveoApps and we’ll help you analyse your business requirements to find you the perfect app development solution.

*We will send the checklist to your inbox and keep you updated with the latest trends and insights on app development to keep you on top of your game.
by Hiral Atha - Dec 1, 2021 Read the Post