Is Your App Really Designed For The Users? 5 Ways to Be Sure 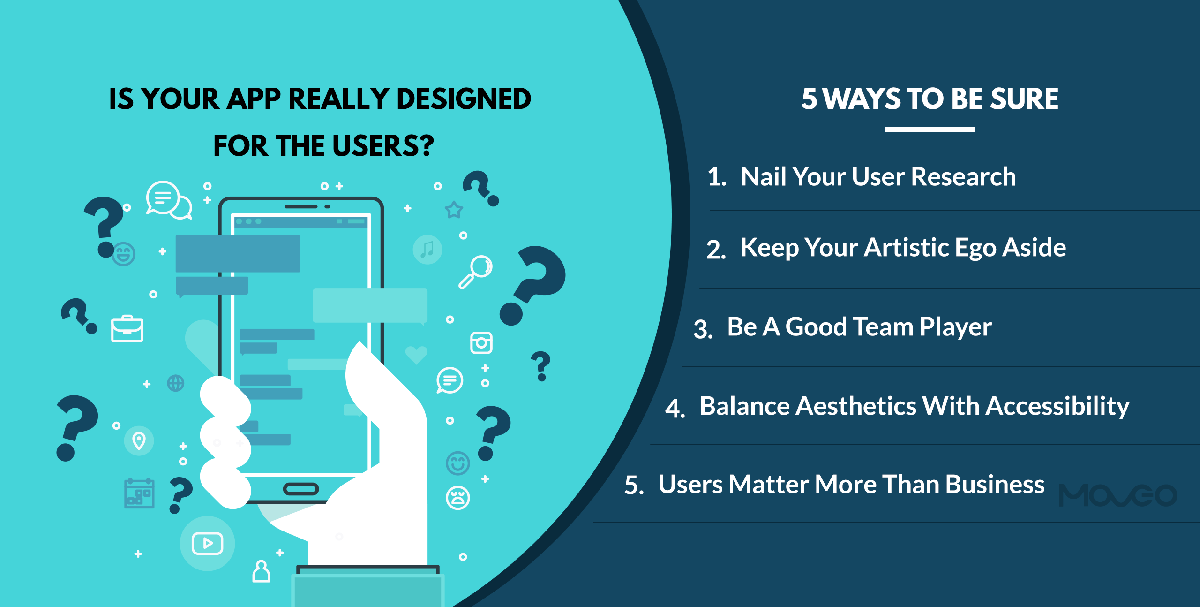 It’s easier than you think, to inadvertently start designing for your business and, to put it bluntly, showing off your skills rather than really paying attention to the user’s needs. But a great UX designer is one who can put the users above their own ego, and create a design that will be easy, attractive and engaging for the user. Being able to design like that requires just a few simple ingredients really, but it happens so often that these subtle nuances are missed and designers go on to create a great design according to their taste and sensibilities. In most cases though, users don’t have the technical finesse or in-depth understanding of design elements like professional designers do. It’s unfair to expect them to appreciate the amount of work you put into creating the hover-activated drop-down menu when all that they want is a simple flat menu.

So the key is to design UX that is tailor made to suit the users’ taste and sensibilities. There’s an urgent need to understand what the user would want, and then double-check to make sure that your design process is compliant with the user’s needs. Here’s how to check and fix your app so it appeals to the users and not your design skills:

The unchallenged founding principle of great UX design is user research. In fact, user research is the only thing that prevents designers from designing for only one user – themselves.

Right from singling out the core offer you are making to the users to understanding what they expect from you, effective, real-world user research is the only way to answering key questions. Get real interviewees to sit in on your research and don’t just ask them questions. Instead, observe them. Look for the moments when they appear uncomfortable or apprehensive, happy or delighted and bored or uninterested. Observe them carefully, watch how they interact with your design and then carefully analyze these observations to understand where your design needs to adapt.

To end up with a really great design, you need to take research seriously and do a bang-on job of it. Here’s a great article on user research to find out more.

2. Don’t Let Your Artistic Ego Get In the Way

Always remember that you aren’t just an artist. You are a problem solver. The success of an entire business hinges on your contribution. So it is unfair to exercise your artistic freewill in your designs. Don’t burden yourself with trying to create a masterpiece. While the innate creativity of a designing mind wants your do something new, something groundbreaking and radical, it’s quite anti-climactic that users often prefer familiar patterns.

So stick to the normal, accepted patterns. Do what it takes to make the UX accessible for the users, even if it means bringing your creativity down a notch and doing the same old red and green buttons instead of an all innovative toggle switch. Place the user’s needs above your highly trained designer’s ego. Don’t design for your artistic satisfaction or the accolades of your colleagues. Don’t design for an award. Design to make the user’s life easier and that is a win.

3. Be A Good Team Player

If you are leading a team of designers, remember to have everyone on board with the design process and play as a team, instead of assigning tasks and expecting everyone to do as they’re told. Identify the skills of each team member and give them control over the task that falls under their skill set. Maybe one of your fellow designers noticed a subtlety in user behavior during research that you may have missed. Lend a willing ear and incorporate everyone’s feedback.

Even if you are working as a solo designer, you are always a part of a team – a team of developers, analysts and stakeholders. Developers especially are of special concern to designers, because they are the ones who need to implement the design. In fact, designer-developer friction is one of the leading causes of bad UX.

You need to thwart this friction and take into consideration the challenges and skills of a developer while formulating your design, so that together, the both of you create a great UX for your users.

4. Strike the Balance between Aesthetics and Accessibility

I understand. You are a designer. You cannot compromise on aesthetics. Everything that goes out from under your hand must be visually spectacular. You understand colors, backgrounds and typography like no one does. But sometimes, the priority of the app is to load quickly and cut to the chase, giving the users what they want. When your users are concentrated in areas with poor connectivity, or if your app is for busy people who have no time to wait (which is all of us really), you may have to forgo a few rich features and settle for a de-glam but quick loading lightweight UX. Looking at a grayscale color scheme might depress you, but if that’s what the client needs, just do it. Similarly, if the app is targeted at users who may be seniors, you may have to use large typeface and big buttons, even if that doesn’t particularly excite you or look elegant. Sending your older users scrambling for their glasses or forcing them to use the tip of their pinky to click that tiny ‘elegant’ button, could really win you some old fashioned cuss words in the review section.

5. Put the User’s Interests above Your Business Goals

So the business goal is to gather as many sign-ups as possible and hence, you quickly design a nifty sign-up form that promptly pops up every time the app is opened. But what the user really wants is to just browse around your app for a while and see if it is truly worthwhile for them. Now, if the user found something and is super excited about reading it, but instead, he has to fill up a form just to access the content, it’s just a massive turn-off. Just don’t do that if you can help it. The point is, sure there are business goals to be fulfilled, but the user always comes first. Find a way to accommodate business requirements somewhere in the process in such a way that they don’t become a hindrance to the user.

It’s quite a dichotomy really. Stakeholders want an app that will make money. But making money as a priority could turn off users. Users like simplicity. But designers want users to try out the latest and greatest they can offer them. Simple or brilliant? Money-making or user-centric? Oh, the things a designer has to deal with are just so difficult. But the fact remains, you just have to keep the user’s front and center. If the users are happy with your design, the money will come, and so will the awards. So always put the users’ needs above those of your own, and the business. The above pointers will help you keep your UX design consistent with user needs, ensuring that your app is loved by all.

*We will send the checklist to your inbox and keep you updated with the latest trends and insights on app development to keep you on top of your game.
by Hiral Atha - Jun 6, 2018 Read the Post