ReactJS vs AngularJS – Choose The Best Framework For Your Project 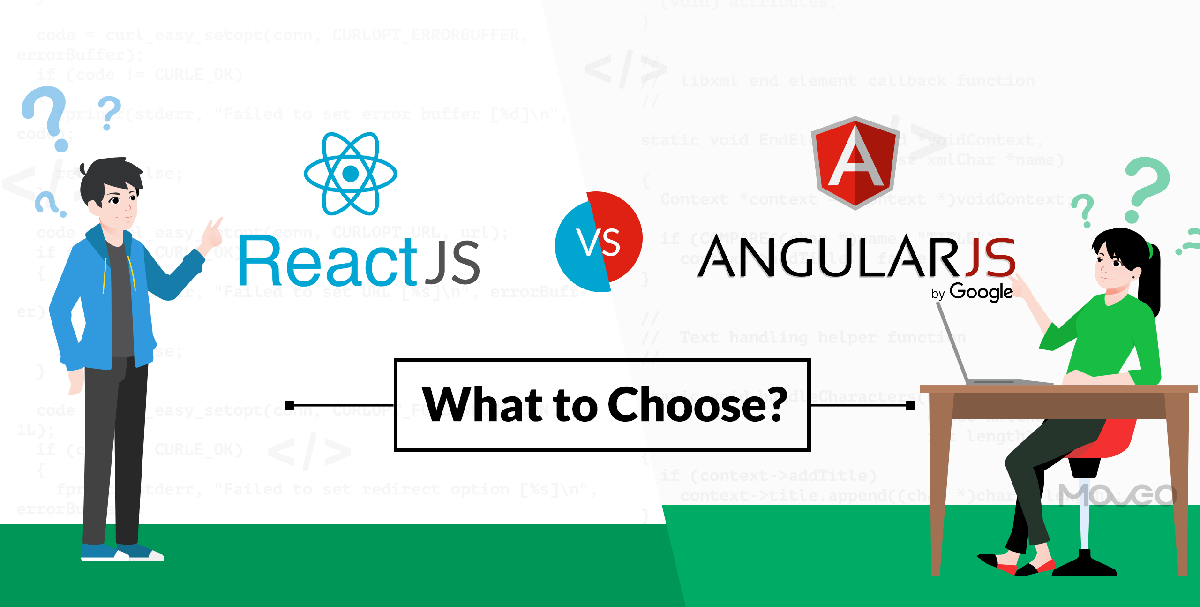 If you’re feeling torn between two of the most loved JavaScript frameworks – ReactJS and AngularJS, this post is just for you.

Choosing the right framework for your project is pivotal to its long term success and scalability. AngularJS, managed by Google has been around for a little longer than ReactJS is owned by Facebook. Both frameworks are easy to use and unique in their own ways. They are both designed to build cutting-edge mobile and web applications. Both have some compelling advantages and a few disadvantages too. This post will perform a comparison of the two, to help you assess which one is more suitable for your project.

JavaScript frameworks are continually developing, and as a result, frequently updated versions of Angular and ReactJS keep surfacing. If we performed a quick study of the demand represented in Google Trends for the last 5 years of Angular and ReactJS, we can see that the two are almost equally preferred, except a few variances. Check out the graph below. The blue and red lines represent Angular, and React.

You can see that both the frameworks have been more or less equally adopted, with Angular leading for some time and React catching up later.

Trends in popularity of Angular and React. Source: Google Trends

Overall, React and Angular develop organically with relatively the same dynamics. If we try to forecast the demand for these frontend frameworks, then we can see a positive tendency for React while Angular has a slightly declining one.

Some of the key technical differences between Angular and React are: 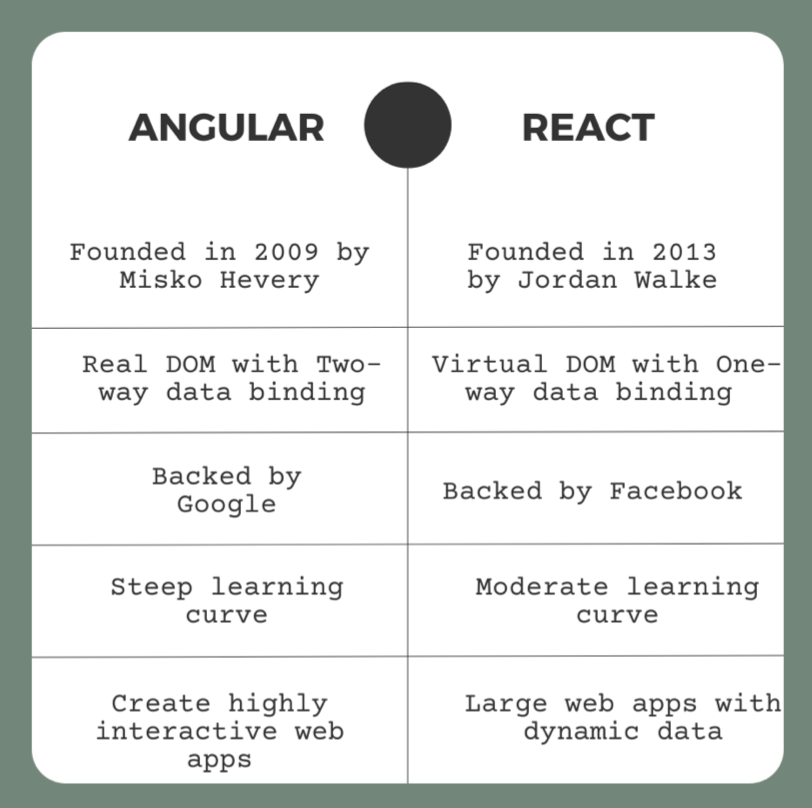 Github too is a good marker of a framework’s popularity. GitHub trends show that while Angular has been highly praised in its early years, React seems to be running ahead in the race right now. 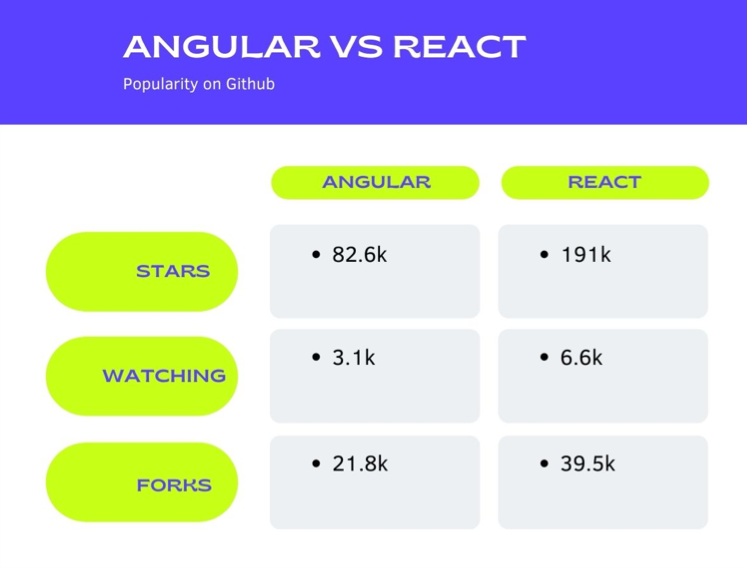 Taking into account the following data, we decided to share the main advantages and disadvantages of every frontend framework and help tech professionals or engineers to choose the best one for their development needs.

Read also:Angular 6 with CLI – Quick Guide to Installation and Setup

Angular is a MVVM framework built on Typescript, founded in 2009, for building highly interactive web applications. It comes with a complete suite of developer tools and well-integrated libraries and features that help developers build high performance scalable web apps. Angular has the support of tech giant Google, and comes out with regular updates that make it cutting edge technology. That is why Angular is currently being used in 345,348 websites and 170,380 unique domains.

In fact, Angular has come a long way since it started out, and supports diverse functionalities today. It is one of the most preferred frameworks among seasoned developers, when it comes to enterprise grade app development like single page apps or progressive web apps.

So if you want apps that pack in high functionality and dynamic data while staying light in its bones, Angular makes for a great choice. Let’s take a look at some of the biggest Angular benefits for web app development.

Angular offers new features like enhanced RXJS, really fast compilation (in under 3 seconds), and a new HttpClient launch. Thanks to its detailed documentation that allows effective communication and collaboration between developers, Angular makes development easier and faster. Some of the top advantages of using Angular for app development are:

Thanks to Angular’s Pain Old Javascript Objects (POJO) model, the code structure becomes handy and independent of external dependencies. Developers are saved from having to add complex functions in the programme and hence requires less coding.

Code consistency is the key to a successful development environment. The Angular CLI and comprehensive ocumentation style guide makes consistency a star in Angular. The Angular CLI tools allow developers to create projects, run tests and various features keeping the entire team on the same page.

The complex syntax that comes from the first version of Angular was a difficulty. Nevertheless, Angular 5 uses TypeScript 2.4 which is the least difficult to learn in comparison. Migration issues which can appear while moving from the older version to the latest ones can be sometimes troublesome.

ReactJS is an open-source JavaScript library, created by Facebook in 2013, used for frontend UI development. Engineers at Facebook were just trying to build a dynamic and high performance UI to optimize their internal development needs, and React.js was born. React.js is a declarative, flexible and efficient JavaScript library specifically responsible for building a hierarchy of UI components for web applications. It uses reusable components to render views, allowing developers to reduce build time for their web apps. It helps manipulate the website DOM faster using the virtual DOM model. Essentially, it is the V part of MVC architecture – helping you develop the View layer of web applications. It helps build web applications faster with rich UI and reusable components.

React.js provides support for both frontend and server-side. It is used by all kinds of businesses – small to large – to build single-page applications and mobile web apps. Some of the biggest examples of companies using React.js are Facebook and Instagram.

React is extremely easy to learn because of its simplified syntax. With their HTML writing skills, developers can easily write in React. There is no need to learn TypeScript deeply like in Angular, making the learning curve a lot gentler for new and transitioning developers.

React’s Virtual DOM allows arranging documents in HTML, XHTML, or XML formats that are better accepted by web browsers while parsing different elements of the web app. That combined with ES6/7, ReactJS can work with heavy loads with relative ease. It’s downward data binding enables data flow that prevents child elements from affecting parent data. Apps built with React JS are extremely lightweight because the data performing on the user side can be easily represented on the server side simultaneously.

This one’s a fun backstory. Facebook was only looking for a way to reduce the Facebook application build time, or re-build time to be specific. They weren’t exactly going after partial refresh of the virtual-DOM. Yet they discovered that a partial refresh was making the application much faster than the conventional full refresh.

The React virtual DOM model refreshes only parts of the page, making is significantly faster than the DOM full refresh. React knows just when to re-render a part of the application by observing data changes to the state.

The result is incredible speed in your web applications built with react.

React introduced the idea of component based architecture and reusable components. This allows React.js developers to take individual pieces of UI elements that work like Lego blocks that can be combined to form a complete, independent, sustainable micro-system.

These components can be mixed and matched to form different applications or parts there-of. So every time you develop an application, the components save you the trouble of writing extensive boilerplate code. Just grab the components you need and build a UI you want in very little time.

Since React.js renders on the server-side, it gives your applications or webpages an edge with search engine optimization, bringing in ample organic traffic. With server-side rendering, the Google bots visiting the server see the indexed and cached content. Also as the page load time decreases, that’s an extra boost to the SEO. Overall, your webpages come into higher visibility and scale the rankings with minimal effort.

React.js can run a little high on the overhead costs. Sometimes, the need arises to download additional react libraries which can cost time and money.

React.js tends to have a steeper learning curve than React Native. New developers may need to spend some time learning React.js before they can proceed to development.

For a real engineer, there isn’t much difference among frameworks to choose. All it takes is a little getting used to. In our company, we grow expertise in mostly ReactJS as well as Angular 2/4/5. Every framework has its own pros and cons, and what you choose depends largely on your business goals and personal preferences. If you need help deciding on one among the two, drop us a line and we can help you choose the one that perfectly fits your requirements.

*We will send the checklist to your inbox and keep you updated with the latest trends and insights on app development to keep you on top of your game.
by Bhargav Patel - Jul 10, 2018 Read the Post